To extend, or not to extend – that is the question.

One part of my recent interview with Ned Colletti that I couldn't work into the main story was his thoughts about offering multiyear contracts to younger players before they become free agents. Here's what he had to say: Andre Ethier was arguably the only arbitration-eligible Dodger who didn't decline in 2010 after receiving a multiyear contract."You have to have some predictability to performance," Colletti said. "Usually, clubs gain a benefit from going multiyear, and it's got to be seen as that from the club's perspective, because you're not guaranteeing performance. All you're guaranteeing is the financial end of the equation.

"If the right situation presents itself, where the guy's in the right place in his career, his life and his priorities, and there's a savings a club can realize, then it's worth doing. But if only the first part's there, that we're gonna pay on the guy maximizing (his performance), there's really no reason to do it – let him go out and do it every year. Some guys who are flawed in an area or who don't possess everything they need, the agent will ask you to pay as if that is occurring, in the event that it does."

In short, Colletti needs confidence that the player is going to stay on track performance-wise, and he needs there to be some savings for making the guaranteed payment. The Dodgers need to get some rebate in exchange for the security that they're offering.

That being said, Colletti said that Clayton Kershaw is the kind of player for whom a multiyear deal might make sense, but that the process wouldn't begin until next winter, when he first becomes eligible for arbitration.

"It'd be something we may think about as this year unfolds and we get into the offseason," Colletti said. "Not this spring. He's got four more years here."

That might appropriate to some, too casual to others. Let's take a closer look.

Colletti signed three key arbitration-eligible players to multiyear deals before the 2010 season – Andre Ethier, Matt Kemp and Jonathan Broxton – and based on 2010 performance, Colletti might well regret two of those contracts. He's also probably quite pleased that he didn't go multiyear with Russell Martin, and not really worried that he hasn't done so with James Loney, who signed his latest one-year deal Friday. Perhaps he should have bought low on Chad Billingsley last winter. (I would have, but I would have also wanted to do so on a lot of the other guys.) In general, recent experience has probably made Colletti even more wary in discussing them with other players.

Here's a snapshot of the salaries for the players we're talking about over a four-year period (multiyear deals in bold, Martin's Yankees salary in parentheses):

Given that Colletti didn't have a crystal ball, it's hard to complain much about how he's handled things. The decision to show restraint on Martin has arguably saved the Dodgers $6 million, which more than covers any fringe costs with Broxton, Billingsley, Ethier or Kemp. The only way this would be reversed is if one of those four or Loney has an MVP or Cy Young season, and you're then fretting that the Dodgers haven't bought out some of their free-agent years, the way Colorado has with Troy Tulowitzki or Carlos Gonazlez. We should be so unfortunate. 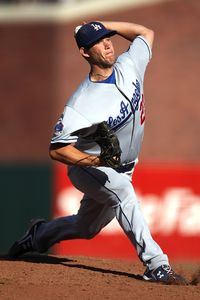 Clayton Kershaw, nearly four years younger than Tim Lincecum, had a lower ERA than the Giants ace in 2010.That brings us back to Kershaw, who becomes eligible for salary arbitration after this season and eligible for free agency after 2014. (Gosh, that seems so nice and far away right now.) How urgent is it for Colletti to lock Kershaw up for multiple years? It would sure feel nice, but you can't say there isn't risk.

Let's turn to the contract status of arguably the reigning young aces of each league (at least until Kershaw decides to do something about it).

One year ago Saturday, Tim Lincecum signed a two-year, $23 million contract (plus incentives in the thousands). The deal came after Lincecum and the Giants were $5 million apart – $8 million vs. $13 million – in their 2010 arbitration filing. It didn't come close to addressing his free-agent years; it just was a hedge against what Lincecum might have earned going year-to-year. Hypothetically, if Lincecum had settled for a 10.5 million salary in 2010, he might have been looking at something like $17 million this year, making for a total in the neighborhood of $28 million. (Though Lincecum slipped a bit in the 2010 regular season, his postseason performance would have helped rectify matters.)

Put one way, the Giants a year ago risked committing $13 million in 2011 salary in order to save about $5 million. That's some high-stakes Mahjong.

Over in the American League, Felix Hernandez and the Seattle Mariners played things differently. After earning $3.8 million in 2009 and facing a $4.3 million gap in salary arbitration filings ($7.2 million vs. $11.5 million), Hernandez signed a five-year, $78 million pact that locked away his first three years of free agency (2012-14). The contract averages $15.6 million per year for five years, $19.3 million for the three free-agent years. Again, there's no mistaking the double-edged sword: You can assume that $58 million for three years wouldn't have cut it for Hernandez after this season, but the risk is catastrophic if something goes wrong.

I think it's pretty clear where my sentiments lie with Kershaw – I'd sign him to a multiyear contract tonight – but you can understand why Colletti might hesitate or procrastinate. For another example, look how quickly opinions turned on Eric Gagne before his multiyear deal vs. after he got hurt. It's harder to stomach paying big bucks for an injured player than it is to pay bigger bucks for a healthy superstar.

On the other hand, better Clayton Kershaw than Jason Schmidt.

In my head, I can understand the patience, as much as I believe it should be done.