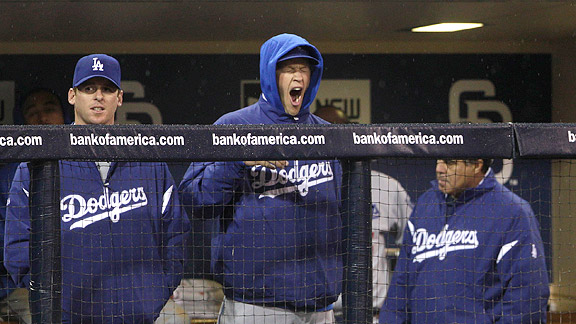 Time for lullabies ...It's funny to think that in the space of an entire work week, the Dodgers only finished two baseball games.

At 1:40 a.m., in the midst of a fourth rain delay that had left the score tied 2-2 in the ninth inning, umpires sent the Dodgers and Padres back to hotel and home, telling them to resume play at 5:35 p.m. today.

Here's the report from The Associated Press on where things stand:

It was a long, wet and cold Friday night that stretched into early Saturday morning.

When the umpires finally decided to suspend the game between the Los Angeles Dodgers and San Diego Padres, there had been four rain delays totaling 3 hours, 36 minutes.

The game was tied 2-2 in the top of the ninth inning and only a few hundred fans were still at Petco Park when the umps called it.

The final delay began at 1:13 a.m. Matt Kemp had just hit a leadoff single when it started pouring. The game was suspended at 1:40 a.m.

Clayton Richard, who started the game for the Padres but didn't return after the second rain delay, had never seen anything like it.

"We were talking about that," Richard said. "It's so late now, I'm trying to stay awake, to be honest."

During the long breaks, the players sat around and talked, hit the weight room or snacked.

"We played baseball every now and then, so that kept us awake a little bit," Richard said. ...

Two of the rain delays came with Kemp on base. The Dodger center fielder is 3 for 3 with a walk and stolen base so far in the game, raising his season on-base percentage to .519.

Casey Blake singled and walked and stole third, scoring the tying run on a throwing error. The rest of the Dodgers were 1 for 23 with a walk. Both Dodger runs so far have been unearned.

Juan Uribe and Marcus Thames each have gone 0 for 3 with two strikeouts in the batting spots behind Kemp, though Loney at least was having a fine defensive game.

Ted Lilly failed to complete the fifth inning for the second consecutive start, but as Tony Jackson of ESPNLosAngeles.com writes, Lilly was anything but wilting.

... It began at the end of a one-hour, 34-minute rain delay, long enough that Padres manager Bud Black judiciously pulled his starter, Clayton Richard, after just 16 pitches. But Lilly was having none of that. When the game resumed, so did he. Already he had escaped a first-and-third, one-out situation in the first inning by getting Jorge Cantu to fly to shallow right and Ryan Ludwick to fly out to left.

After the delay, Lilly's high-wire act continued. The Padres would strand at least one baserunner in each of the first four innings, at least one in scoring position in three of them. But each time, Lilly would pull off a daring escape, punctuating his performance with back-to-back strikeouts of Todd Hundley and Cory Luebke to strand two runners in scoring position in the fourth.

The definitive Lilly moment, though, came at the plate in the top of the fifth. With two outs and nobody on. The sort of situation when most starting pitchers take their obligatory hacks, make the obligatory last out of the inning and get back to business. But not Lilly. He worked Luebke for a full count. And when he finally popped up on the sixth pitch, almost three hours after he had thrown his first pitch of the evening, Lilly took two steps out of the box, raised his bat above his head and slammed it into the dirt of the basepath in frustration.

Lilly finally reached the end in the bottom of that inning, leadoff hitter Will Venable reaching second when Matt Kemp bobbled his base hit to center for an error and the Padres eventually scoring twice to take a short-lived 2-1 lead. Lilly had thrown 85 pitches, with a long rain delay between pitches No. 13 and 14. He had been in constant trouble and had gotten virtually no run support from a Dodgers offense that seems to be getting weaker by the day. He had been so deliberate in his delivery that the Padres had stolen three bases behind him. But he had never flinched. ...

Hong-Chih Kuo, who got the final out in the eighth inning in relief of Matt Guerrier, is the current Dodger pitcher. If he can't pitch on consecutive days, the Dodgers have four relievers behind him: Blake Hawksworth, Lance Cormier, A.J. Ellis and Jonathan Broxton. I'd like to remind Dodger manager Don Mattingly to use his relievers in order of quality, rather than holding his best reliever back for a save situation.

The Dodgers, if they desired, could make a player transaction in between the end of the suspended game and the start of tonight's regularly scheduled game if one becomes a marathon and they want to beef up the bullpen. On the other hand, the workload this week has been so slim, I don't expect the Dodgers to make a move until they add a fifth starting pitcher to the roster. That's expected to happen Sunday, though Clayton Kershaw could always pitch that day on four days' rest.

Manager Don Mattingly said he'll "have to be careful" with his pitching decisions when the game resumes, saying Kuo might be able to pitch on consecutive games. But he ruled out the possibility that Saturday's scheduled starter, Hiroki Kuroda, would finish up the suspended game and then start the regular one.

Mattingly said he spoke with general manager Ned Colletti about calling up a pitcher, "but we don't have a lot of flexibility" because the Dodgers are already planning on calling up a fifth starter (probably John Ely) for Sunday in place of the disabled Jon Garland.

Heath Bell, the Padres' closer who entered the game in the ninth inning, was their sixth pitcher of the game.

Two Dodger wins today and a Rockies loss would put Los Angeles back in first place in the National League West – despite being the division's only team to have been outscored so far this season.