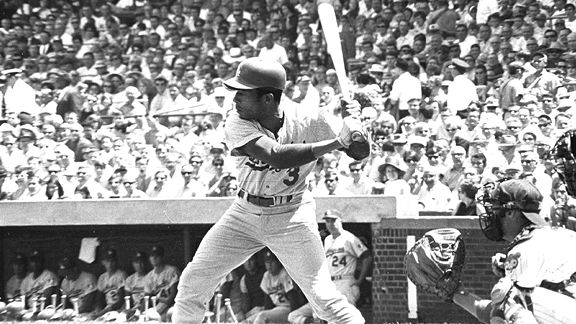 With Walter Alston looking on from the dugout, Willie Davis stands in the batter's box in 1969.Four years ago, I wrote about the 31st game of Willie Davis' record-setting Dodger hitting streak and Vin Scully's broadcast of it:

... In the bottom of the seventh inning of the 1969 game, his hitting streak on the line, Davis tried to bunt his way aboard, to no avail. With the Dodgers still leading by four runs, and starting pitcher Claude Osteen having thrown 25 1/3 consecutive scoreless innings, it appeared Davis' pursuit was done.

But in the top of the eighth, New York's Tommie Agee and Donn Clendenon each hit two-run home runs, tying the game. The Dodgers were stunned -- so stunned, they didn't collect themselves before the next Mets batter.

"Ron Swoboda hits the ball to Osteen, who throws him out -- and [Dodger manager] Walter Alston was on the field! He was heading to take Osteen out, when Swoboda hit the first pitch back to the box," Scully exclaimed with amazement.

On top of that, the tie meant that opportunity had made a U-turn back toward Davis. And in the bottom of the eighth, two walks alternating with two strikeouts presented a unique conundrum for Dodger fans, one that Scully didn't hesitate to point out.

"If the pitcher makes out, or whoever bats for him [it would be Willie Crawford], then Willie Davis will then be the No. 3 hitter in the ninth inning -- unless the Dodgers get a run and win it, of course," Scully said.

"And boy this is a really tough one, isn't it? Crawford is trying to win the game. If he makes the last out in the eighth, Willie Davis will get another shot at extending his streak."

Crawford grounded out, and then the Mets stranded a runner at second base in the top of the ninth, setting up Maury Wills, Manny Mota and Davis to bat in the bottom of the inning.

"And for more of the fun for the folks in the stands trying to figure out about Willie Davis," Scully said, "if Mota sacrifices Wills to second, will they pitch to Willie? Left-handed pitcher on the mound. He's a left-handed batter."

"And now we are faced with that situation -- do you walk Willie Davis?" Scully continued after Mota did bunt, successfully. "He's getting an ovation. The one thing in his favor, oddly enough, is there's a left-handed pitcher on the mound. If there's a right-hand pitcher, the odds figure for sure they would walk him intentionally. But what will they do with a left-hander? I tell you what, if they walk him, you're going to hear a few boos.

"Duffy Dyer is standing up behind the plate. And let's see. If he does not go in a crouch, they're going to put him on. Dyer looks over at [Mets manager Gil] Hodges. He's not in a crouch ... and now he goes in a crouch! They'll pitch to him. Dyer kept looking at Hodges, and finally settles in a crouch. And Davis has one last swing -- or is it the last swing?

As he knows to do so well, Scully stayed silent to let his listeners hear the crowd cheer -- for 44 seconds. And when he came back, he had this:

"Day after day, and year after year, the Dodgers remain the Dodgers. And through all the lightning bolts, the thunder, the heartbreaks, the laughs and the thrills, it's comforting to know in this wacky world, the Dodgers are still the Dodgers. Incredibly enough, Willie Davis, on one last shot, when the question was in doubt if he would be even allowed to swing the bat, gets a ninth-inning game-winning base hit to extend his hitting streak to 31. And as Alice said, 'Things get curiouser and curiouser.' What a finish." ...

If Andre Ethier blows past the halfway point to Joe DiMaggio tonight and is going for 31 games in a row Friday, it will be against ... the Mets — but in New York. Unfortunately, unless he decides to make an exception to his travel schedule, Scully wouldn't be there to broadcast it.