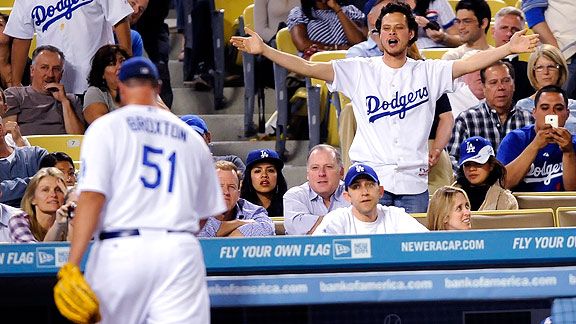 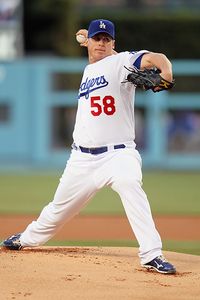 Chad Billingsley allowed only one run in seven innings, all for naught.Jonathan Broxton has given Dodger fans a lot of heartache this year, but tonight he looked as sickly as he ever has in my memory.

Broxton entered tonight's game in the ninth inning of a 1-1 tie. After retiring Aramis Ramirez on two fouls and a popout, Broxton walked the next two batters on eight pitches, and few of them were close to the strike zone. According to MLB Gameday, the pitches were all fastballs, one reaching 93 miles per hour and the average at 91. That's just not the Broxton of 12 months ago, and I'm not convinced it's even the Broxton of 12 weeks ago.

People have been strangely fascinated with Broxton's facial expressions and posture, but here's a suggestion: Someone needs to look at his arm. Even if they've looked at it before, look at it again.

After the first walk, Blake Hawksworth began warming up in the bullpen, and after the second, Don Mattingly came to the mound. He talked to Broxton and the other assembled Dodgers, clearly stalling for time as Hawksworth raced to get ready, before finally telling home-plate umpire CB Bucknor to call for a rare mid-inning hook of the Dodger reliever.

Though I've always suspected Broxton's been off physically since his serious struggles began in late June, this was possibly the first time I watched him and said to myself, "There's a guy that's headed straight for the disabled list." Of course, what I observe from my seat far from the pitcher's mound has no real relevance, but I just offer it as an impression.

It is, I will say, a little peculiar to me that it doesn't occur to the people who are calling for Broxton's head and questioning his mental makeup that Broxton is possibly pitching hurt, and maybe has been for some time. If he has been concealing an injury, I sure hope he comes clean. (Update: From KABC 790 AM via True Blue L.A.: "After the game, Don Mattingly told reporters that Broxton was still his closer, but didn't sound convincing. "When guys tell you they're fine, you believe that. The inconsistency in velocity concerns me. You don't know if you're getting the whole story. We need to figure this thing out.")

Hawksworth looked like he would bail the Dodgers out after he got Alfonso Soriano on a can of corn to Matt Kemp, but the next batter, Geovany Soto, drove one to right-center that split Kemp and Andre Ethier for a double, driving in two runs. Blake DeWitt followed with his second pinch-hit single in two nights, capping the Cubs' 4-1 victory over Los Angeles.

On the bright side, Ethier got the business of taking his 28-game hitting streak to 29 out of the way in the fourth inning with a single over leaping second baseman Darwin Barney, tying Ethier with Zack Wheat's 1916 skein for the second-longest in Dodger history. For anyone complaining about Ethier getting a couple cheap hits this week, he got robbed of one by a diving Barney in the eighth inning.

Two innings later, after a single by Jamey Carroll, a sacrifice by Jerry Sands and a groundout by Ethier, Kemp gave the Dodgers a 1-0 lead with a single to center – the only run the Dodgers got against Ryan Dempster, who entered the game having allowed 33 earned runs in 31 innings this season.

Another struggling Cub, Carlos Pena (.171 slugging percentage), got well with one out in the top of the seventh. Pena tied the game with a high fly over the short fence down the right-field line for his first homer of the season, this coming off Chad Billingsley, who only allowed three other hits and two walks all night while striking out eight. And that took us to the ninth.