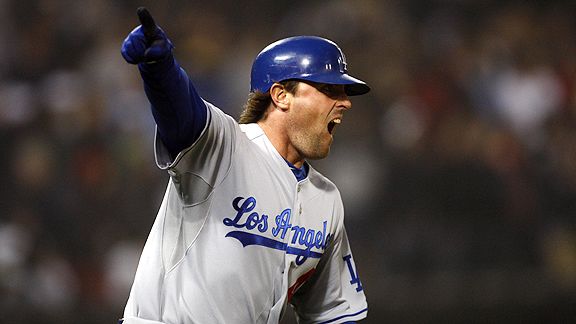 Banging against the door.

White Sox 3, Dodgers 2. None out, top of the eighth, bases loaded.

Banging against the door, like they were down 5-2 in the eighth Wednesday.

Banging against the door, like they were down 3-1 in the ninth Thursday.

Banging against the door, and no one will let them in.

Wednesday, tie the game then lose.

Thursday, hit a line drive with the bases loaded and lose.

Lose another starter, Juan Uribe, to injury and ... win?

Two out, bottom of the ninth, bases empty and ... win?

Bang that door down.

Mitchell, whose seven career hits included two home runs, drove a 2-1 fastball just inside the left-field foul pole to tie the game at 3.

Then in the 10th, after Jamey Carroll's fourth hit of the game and Matt Kemp's second, Juan Castro, who had wasted bases-loaded opportunities in his two previous at-bats this week, looped one over a leaping Paul Konerko for a 150-foot single, driving in Carroll. James Loney, who had been 0 for 4, doubled to right for a 5-3 lead. Then, after an intentional walk to Dioner Navarro (you got me), Jay Gibbons singled home the third run of the extra inning.

Mitchell's heroics weren't done, as it turned out. The third baseman dove to his left to corral Alexei Ramirez's grounder for the first out of the inning.

Then Don Mattingly started playing percentages. He brought in Scott Elbert – who head-butted all kinds of doors last year – to retire Adam Dunn on a groundout to Loney for a meaningless RBI. And then Mattingly brought in Mike MacDougal, who faced Konerko.

Konerko hit it to Castro, who bobbled it but had plenty of time to pick it up and throw the final batter out.

And so finally, the script had changed. A first-inning home run by Kemp wouldn't go to waste. A three-run second inning off Ted Lilly wouldn't spell doom. The sight of Jerry Sands in center field next to Jay Gibbons in left in the late-night fog wouldn't lead to a comedy of errors. A final-inning rally would actually succeed.

Tony Jackson of ESPNLosAngeles.com has a length update on all the injured Dodgers.