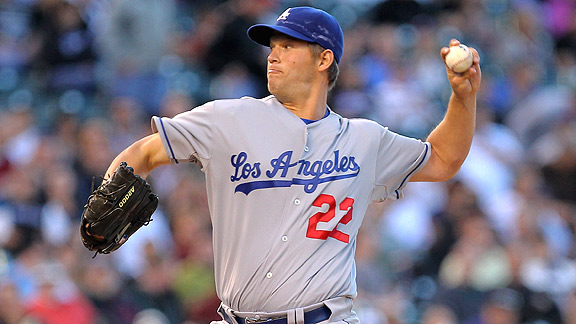 The Dodgers are going to give Jerry Sands a breather from the major leagues, replacing him on the active roster with lefty-hitting outfielder Trent Oeltjen, who had a .429 on-base percentage and .583 slugging percentage at Albuquerque. Tony Jackson of ESPNLosAngeles.com has details.

In addition, the Dodgers outrighted minor-leaguer Luis Vasquez from the 40-man roster to Single-A Rancho Cucamonga.

Have no fear about Sands — despite his recent slump, his initial foray into the bigs should be viewed in a positive light, providing some great moments as well as some knowledge of how he has to improve.

As for the major-league roster, I wonder if this move sets the stage for Casey Blake to play some left field, as was discussed months ago.

It's Clayton Kershaw Day on the Internet, with several pieces on the Dodger lefty: