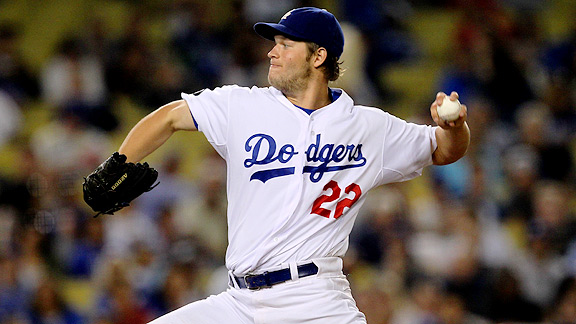 As in, that Clayton Kershaw blankety-blanked the Detroit Tigers tonight, 4-0, for his second two-hit shutout in the past three weeks and, in his 99th career start, the top performance of his career.

On May 29, Kershaw struck out 10 in his 116-pitch two-hitter of Florida. Tonight, Kershaw struck out 11 members of one of the better offenses in baseball – including all three batters in the ninth inning – to complete his 112-pitch outing. The 23-year-old leads the majors in strikeouts with 117.

Kershaw faced only 29 batters in the game – with a tip of the cap to Dioner Navarro's perfect pickoff of Ryan Raburn at third base in the third inning – matching Sandy Koufax in Game 5 of the 1965 World Series for the quickest shutout and quickest victory over an American League team in Dodger history, regular season and postseason.

Kershaw also gave himself some breathing room in the bottom of the eighth with a two-out, two-run single to double the Dodger lead. Combined with his third-inning walk, Kershaw raised his 2011 on-base percentage to .333 – better than opponents are doing against him this year.

Since the bumpy blown leads of Cincinnati and Colorado, Kershaw has pitched 16 innings and allowed one run on six hits and three walks while striking out 15. And the Dodgers have thrown back-to-back shutouts, reducing their deficit in the National League West to seven games,

The game-winning RBI went to Juan Uribe, batting second tonight ahead of Andre Ethier as manager Don Mattingly tries to jump-start his season. Uribe didn't see many fastballs in his first trip to the plate but belted a 3-2 changeup from Brad Penny for his fourth homer of the year and first in more than 100 at-bats since April 29.

Update: The following is from ESPN Stats and Information:

- Kershaw had good command of his slider, keeping it primarily down in the zone. He threw 10 sliders down in the zone, all with two strikes. Tigers hitters swung at eight of them and missed on seven.

Kershaw's performance Monday tied him for the second-highest game score this season.

It also ties for the fifth-highest ever in interleague play (behind a perfecto, a no-no, and a pair of 1-hitters).