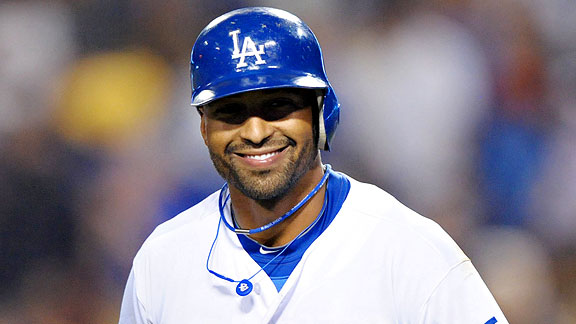 Matt Kemp (shown above wearing his airplane headset around his neck) is the Dodgers' best Triple Crown candidate since Adrian Beltre, who led the NL in homers in 2004 and finished fourth in batting average and RBI.No, we don't value RBI much as a stat in these parts — not without context anyway — and we value batting average even less.

Unless they give us something fun to root for.

Here we are on August 1, and Matt Kemp still is plumb in the thick of Triple Crown contention.

Admittedly, some of those games will be in pitcher paradises like San Diego, where the Dodgers begin a three-game series tonight. But most of them are in ballparks where Kemp's bat will feel much more footloose and fancy-free than it has in Dodger Stadium this year, where he is batting .301 with 11 homers and 42 RBI in 59 games.

The odds are against Kemp, but it's not ridiculous to think he could do it. Here's the breakdown:

Comeback Player of the Year candidate Berkman is 35 and has been battling shoulder issues. Kemp's bigger challenge might come from the guys behind him: renowned tater-trotters Pujols and Fielder as well as the up-and-coming Stanton.

How close is it to a miracle that Kemp is leading the National League in RBI? His team's No. 1 and No. 2 hitters are combining for a .327 on-base percentage, which is 10th in the NL and worst among the five teams represented here. But he's come this far ... why stop now?