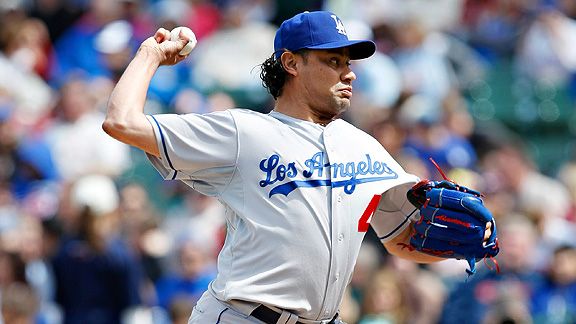 Vicente Padilla (10)The setup: Following a 2010 in which he was a controversial choice as Opening Day starter (it seems so long ago now), only to pitch 95 innings all year, the Dodgers re-signed Padilla for 2011 in December. The reasons: He required only a $2 million base salary, he had a summertime hot streak (after recovering from right forearm trouble) in which he had a 1.32 ERA in eight starts and 54 2/3 innings with 48 strikeouts, and he and the Dodgers came to an understanding that he might end up as the team's closer if Jonathan Broxton continued to struggle.

The closeup: Arm trouble returned for Padilla before March even arrived, with the righty undergoing surgery to free up a nerve in his forearm. By the time he was ready to make his 2011 debut on April 23, concern had begun to mount for Broxton, who, despite being 1-0 with five saves in five opportunities, had allowed 14 baserunners in 8 2/3 innings. Though Padilla gave up a run on two hits and a walk in his second appearance of the season, it only took a perfect inning his next time out, saving a 10-inning victory in Florida on April 27, to ignite his candidacy for closer. On May 4, the day Broxton was shut down to have an MRI, Padilla pitched a shutout ninth inning (in a 5-1 loss to the Cubs), and it seemed the Dodgers' backup plan was in motion.

However, after Padilla pitched three times in the ensuing week, allowing three runs in 2 2/3 innings, he was done. Placed on the disabled list May 19, he never came off. In June, he had season-ending neck surgery. He finished his season with 8 2/3 innings pitched in nine games and a 4.15 ERA.

Coming attractions: Padilla, who turned 34 on September 27, is a free agent again. News on his recovery has been hard to come by, but if he has any inclination toward a comeback, there should still be interest in offering him at least a minor-league contract from more than a few teams, including the Dodgers. If someone like Mike MacDougal was worth a shot last winter, Padilla with a clean(er) bill of health might be as well.