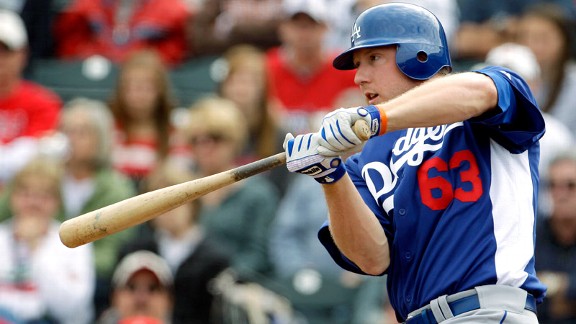 Jamie Hoffmann (30)The setup: After playing in 14 games for the Dodgers in 2009, Hoffmann went to the Yankees via the Rule 5 route, ended up returning to the Dodger organization and spent all of 2010 with Albuquerque, leading the team in hits with 169 while OPSing .800. A strong defender, Hoffmann has seemed worthy of a backup spot on a major-league roster to me, though professional opinions tend to differ.

The closeup: Hoffmann turned out to be the second position player called up by the Dodgers this year, coming up April 11 essentially to replace the latest Dodger injury victim, Hector Gimenez. Hoffmann pinch-hit that night and grounded out, then started three nights later and went 0 for 3 with a strikeout. The following day, Hoffmann was sent back to Albuquerque in another domino-effect series of moves, and did not make it back to Los Angeles the remainder of the year despite having his best year with the Isotopes: .356 on-base percentage, .497 slugging percentage and 22 home runs. He set a Pacific Coast League record for consecutive errorless games by an outfielder that is still going strong at 188, and was ultimately named the Isotopes' 2011 Most Valuable Player.

Coming attractions: Hoffmann remains on a Dodger 40-man roster that, once free agency begins, will have only five outfielders on it. The chances of him holding that same spot next April seem slim.