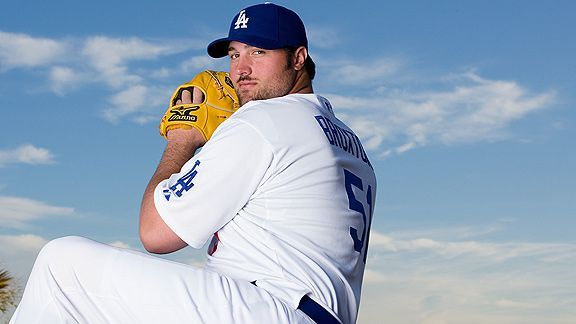 Jonathan Broxton (43)The setup: The polarizing pitcher whose mostly dominant career was marred by two notorious postseason setbacks entered his free-agent year hoping to recover from his biggest struggles yet – having allowed 62 baserunners and 26 runs in 29 2/3 innings dating back to his infamous 48-pitch outing against the Yankees on June 27, 2010.

The closeup: Both Broxton and general manager Ned Colletti asserted that health was not an issue with Broxton's struggles, with Colletti saying a physical backed up their claim. But was something missed? Entering the year with 11.7 strikeouts per nine innings since his 2005 debut, Broxton fanned only one batter in his first five outings (4 1/3 innings) while allowing two home runs. Then, when his strikeouts increased, his runs allowed did as well. After he allowed two runs on three hits in an inning against St. Louis on April 18, we found ourselves here:

... I really think it's important to be clear about this. For the longest time, the concern that Broxton's detractors had was not that he couldn't get anyone out, but just that he wouldn't get the job done in October. The explanation offered the most was that he didn't have the backbone, guts or other relevant body part to succeed under pressure.

I never bought into that argument, because I saw Broxton succeed too many times under pressure - including in the playoffs - to see a pattern, and that given another opportunity, there were more reasons to believe he would succeed than there were that he'd fail. Many more reasons. Baseball history is filled with onetime October failures who found redemption. ...

... The problems of Jonathan Broxton today are different problems entirely.

Broxton is having trouble getting people out, period. He has retired the side in order once in eight outings. He has allowed 13 baserunners in 7 1/3 innings while striking out five. He's being touched not just in save situations but in non-save situations. He's allowing runs not in playoff games in October, but midweek games in April. ...

Two scoreless outings brought some temporary relief for the reliever, but on April 25, Broxton was charged with a blown save thanks to two unearned runs at Florida, an outing that led to questions about whether he was still the Dodger closer or not. He allowed three hits and a run while picking up a save April 29.

Jonathan Broxton has given Dodger fans a lot of heartache this year, but tonight he looked as sickly as he ever has in my memory.

Broxton entered tonight's game in the ninth inning of a 1-1 tie. After retiring Aramis Ramirez on two fouls and a popout, Broxton walked the next two batters on eight pitches, and few of them were close to the strike zone. According to MLB Gameday, the pitches were all fastballs, one reaching 93 miles per hour and the average at 91. That's just not the Broxton of 12 months ago, and I'm not convinced it's even the Broxton of 12 weeks ago.

People have been strangely fascinated with Broxton's facial expressions and posture, but here's a suggestion: Someone needs to look at his arm. Even if they've looked at it before, look at it again.

After the first walk, Blake Hawksworth began warming up in the bullpen, and after the second, Don Mattingly came to the mound. He talked to Broxton and the other assembled Dodgers, clearly stalling for time as Hawksworth raced to get ready, before finally telling home-plate umpire CB Bucknor to call for a rare mid-inning hook of the Dodger reliever.

Though I've always suspected Broxton's been off physically since his serious struggles began in late June, this was possibly the first time I watched him and said to myself, "There's a guy that's headed straight for the disabled list." Of course, what I observe from my seat far from the pitcher's mound has no real relevance, but I just offer it as an impression. ...

On the next day, Broxton was shut down to have an MRI, and he never pitched again for the Dodgers in 2011. Even after he went to the disabled list, the diagnosis (or at least the seriousness) of his condition seemed to keep shifting, punctuated by a rehab process that ended up being scrapped at the end of June. Not until September, more than four months after his last major-league game and 15 months after the series against the Yankees that seemed the source for all his problems, was Broxton finally scheduled for surgery.

Coming attractions: Broxton's Dodger career ended with the news today that he had signed with Kansas City, pending a physical. Reports are that he will earn a $4 million base salary plus incentives.

Broxton leaves Los Angeles as its all-time leader in strikeouts per nine innings with 11.6 (minimum 300 innings), fifth in adjusted ERA at 132 and seventh in saves with 84.

Much virtual ink has been spilled on Broxton's pros and cons, and it's been months since I've felt the need to add anything new to the debate, a debate I am happy to put behind me. So with that in mind, I will close with something I wrote back in April:

There is one thing I will insist on, however. For nearly five seasons - an eternity for most relievers, longer than, for example, the elite tenures of Eric Gagne or Takashi Saito as Dodgers - Jonathan Broxton was a great, great relief pitcher. The NLCS losses were crushing - indeed, for many they were poisonous - but he's hardly the first great hurler who has pitches he'd like to get back. He has truly been one of the best relief pitchers in Los Angeles Dodger history, whether his best days are over or not.