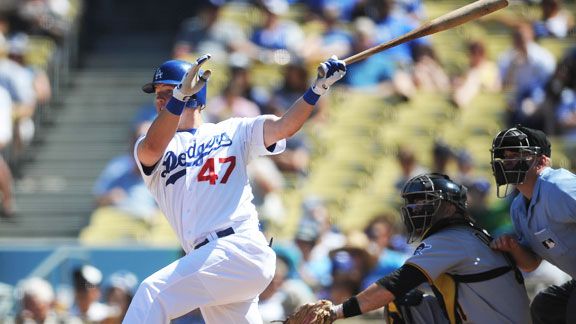 Jerry Sands (44)The setup: The Dodgers' top minor-league hitter in 2010 (with a .395 on-base percentage, .586 slugging percentage and 35 homers in 590 plate appearances combined at Single-A Great Lakes and Double-A Chattanooga), Sands was in position to make his big-league debut in 2011. His timetable depended on his continued development in Triple-A and the effectiveness of the Jay Gibbons-Marcus Thames-Tony Gwynn Jr. left-field combo.

The closeup: Much sooner than expected, on April 18, Sands was called up as Xavier Paul was designated for assignment. That night, Sands had an RBI double in his first major-league at-bat, one of 10 doubles he had in his first 87 plate appearances. He had a three-hit game April 25, a four-hit game May 22 and a grand slam May 24, his second home run in four games. Following the slam, however, Sands slumped, going 3 for 33 with two walks and no extra-base hits. With Gibbons, Thames and Gwynn making a rare simultaneous appearance on the active roster, the decision was made June 9 to send Sands back to Albuquerque, where he could not only play every day but work on some long-term adjustments with his swing.

He finished his rookie Dodger season on his 24th birthday, with a .338 on-base percentage, .389 slugging percentage and 15 doubles in 227 plate appearances.

Coming attractions: With only four home runs in the majors, Sands still has something to prove in the power department, but that doesn't mean he isn't right now the franchise's third-best outfielder behind Matt Kemp and Andre Ethier. Rivera, who received millions from the Dodgers this offseason, had an OPS in Los Angeles of .740 last year compared to Sands' .727 – you tell me how you think those will trend next year.

Nevertheless, pending the official signing of a 2012 contract by James Loney, there's no place in the regular 2012 Dodger lineup for Sands. At best, he could platoon against left-handed pitchers with Ethier or Loney, if the Dodgers had the cutthroat approach to play things that way with two of their longtime starters. Sands went 22 for 60 with seven walks, seven doubles and three homers for a 1.066 OPS against lefties for the Dodgers.

Otherwise, it seems quite possible that Sands will begin 2012 as he began 2011 – in the minors, waiting for an opening – but with more confidence that he can handle the promotion once it arrives.