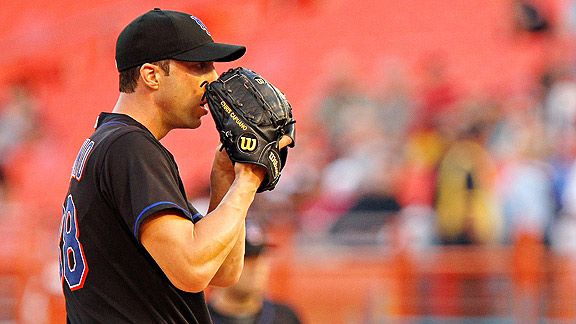 The Hiroki Kuroda era has all but ended in Los Angeles, with the Dodgers agreeing to terms with 33-year-old lefthander Chris Capuano on a two-year contract worth a total of $10 million, according to Jim Bowden and Jayson Stark of ESPN.

Capuano should be replacing the Jon Garland spot in the Dodger rotation, which in turn became the Rubby De La Rosa and Nathan Eovaldi slot. But all recent signs from Ned Colletti have indicated that the Dodgers don't have the budget to sign two free-agent pitchers, which would mean that Capuano would replace Kuroda, with Eovaldi competing with your Dana Eveland types for the No. 5 spot.

The only reason I'm not sure about this is the possibility of Capuano and Kuroda salaries being weighted to future years to fit them both into the 2012 payroll.

Capuano is more than three years younger than Kuroda, and though he is bouncing back after missing 2008 and 2009 because of Tommy John surgery, he is not of Kuroda's caliber, even given the likelihood of Kuroda declining in 2012 at age 37. Capuano's career-best adjusted ERA of 113, achieved five years ago, ranks below Kuroda's average for his major-league career.