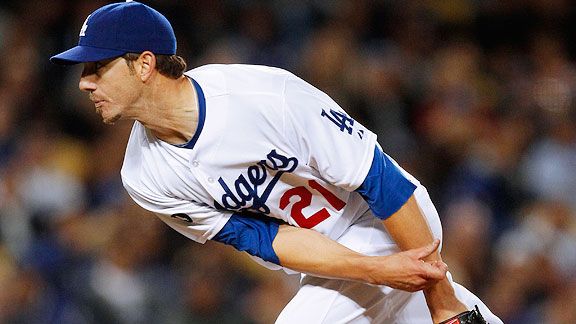 Jon Garland (45)The setup: After starting six games down the stretch for the Dodgers in 2009 (but then going unused that postseason), Garland ambled down to San Diego for 2010, pitching exactly 200 innings with 136 strikeouts and a 3.47 ERA (106 ERA+). The Dodgers then signed him as a free agent in November to a one-year contract with a $5 million base and $3 million in potential incentives. Durability was one of Garland's claims to fame, though even Garland noted that the MRI associated with his physical raised concerns.

The closeup: March 9. That's how quickly the injury bug bit Garland, leaving the mark of a left-oblique injury. That delayed his regular-season debut until April 15, a rather predictably shaky four-inning outing against St. Louis.

But in his follow-up, Garland threw a complete-game, four-hit, 6-1 victory over Atlanta, and he was off to the races. It was the first of five consecutive quality starts in which he had a 2.65 ERA over 34 innings (though only one was a victory, thanks to the Dodger offense averaging 2.6 runs per game behind him). Garland's original team, the White Sox, hammered him May 21, but then two more quality starts followed. By June 1, Garland had made nine appearances and seven of them were quality starts – not bad for the team's No. 5 starter.

Oh, and then his season ended. A right-shoulder injury that required arthroscopic surgery put Garland on the disabled list, and he never came off.

Coming attractions: On October 4, the Dodgers said they would pay $500,000 to exercise the buyout of Garland's $8 million option for 2012, bidding farewell to the Granada Hills Robert Frost Middle School graduate for the second time in 24 months and helping pave the way for Friday's Chris Capuano signing. In two stints with Los Angeles, Garland made a total of 15 starts with a 3.69 ERA and 54 strikeouts in 90 1/3 innings.

Ken Gurnick of MLB.com wrote in October that in September, Garland said "his recovery was ahead of schedule, and that he intended to begin throwing in November ... (and) be healthy by Spring Training." He should earn interest from some team willing to bet on his rebound.