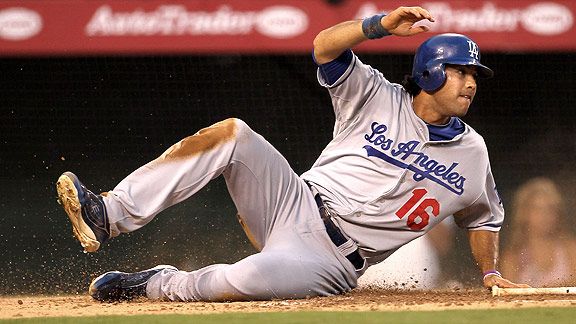 Andre Ethier (46)In an offseason dominated by kudos for Clayton Kershaw and Matt Kemp, speculation about the future of James Loney, headscratching over some free-agent contracts handed out by Ned Colletti, mourning over the imminent departure of Hiroki Kuroda, fretting over the state of the starting rotation and the offense, and of course, cautious optimism about what we hope to be the final chapter in the McCourt ownership drama, you'd be hard-pressed to find many words written about one player integral to the Dodgers' 2012 fortunes: Andre Ethier.

The 2009 Walkoff King, 2010 National League Most Valuable Player dreamer and 2011 challenger to DiMaggio has rather suddenly become something of an enigma, which makes me particularly interested in how he got to this point and where he goes from here – and whether that includes another organization.

The setup: Ethier made his major-league debut in 2006, the first of five consecutive seasons in which he had an on-base percentage of at least .350, slugging percentage of at least .450 and OPS of at least .800. In 2007, he was still earning respect, making 117 starts and sharing time with Matt Kemp in right field and Luis Gonzalez in left while Juan Pierre played every day in center field. The following year began the transition that made Pierre a fourth outfielder (at least until Andruw Jones proved a disaster), but you couldn't say Ethier was the Dodgers' undisputed starter in right until late August 2008.

The next year, 2009, brought Ethier's finest full season. Starting 150 games, Ethier had a .361 on-base percentage, .508 slugging percentage, 31 homers and 42 doubles, finishing sixth in the voting for NL MVP at age 27. He produced with the spotlight off and with it shining bright, bashing four walkoff home runs in the regular season, then in the 2009 postseason going 11 for 31 with three doubles, three homers and three walks for a 1.235 OPS. 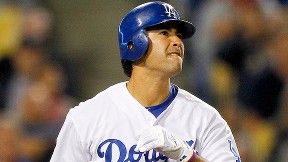 Ethier bit into a grand slam against the Padres on August 30.That, one might have argued in the spring of 2010, was only a prelude to true superstardom. It seems like a long time ago to me now, but it's been barely 18 months since the Dodgers' best player was undoubtedly Ethier, who began the year on a legitimate Triple Crown and MVP run. Through May 14, Ethier had 11 home runs and 38 RBI in 33 games to go with a .392 batting average, .457 on-base percentage and .744 slugging percentage. A monster.

What happened next was like something out of a bastardized Aesop's fable. Ethier's full-on rush to brilliance ended with a fracture on the tip of the smallest finger on his right hand. He missed 15 games, and apparently rushed back too soon to keep it from being more. For the rest of 2011, he had 12 home runs in 105 games, a .338 on-base percentage and .418 slugging percentage.

Still, he finished 2010 as only one of three Dodgers since Pedro Guerrero (Gary Sheffield and Mike Piazza being the others) to have three consecutive seasons with an adjusted OPS of at least 130. As 2011 approached, many assumed Ethier would return to the level he established before the pinky injury - that is, not a Triple Crown place but to a place as one of the best hitters in the game. His struggles against left-handed pitching (.661 OPS lifetime, .625 in 2010) were a wild-card – something that could prevent him from maintaining elite status, but also room for improvement – in which case, look out.

In any event, optimism about Ethier's performance this year and an understanding of his importance to the team was high. That's what made it surprising when, days before a tranquil Spring Training ended, Ethier openly speculated (more than once) that 2011 would be his last season in Los Angeles.

The closeup: Ethier singled in four at-bats on Opening Day, then went 0 for 4 in game 2. Taking a .111 batting average to the plate against Matt Cain in the bottom of the fourth inning on April 2, Ethier got a single in that at-bat and his next two. And so his campaign to break the Dodger and major-league consecutive-games hitting-streak records began.

Overshadowing basically every other Dodger, including Kershaw and Kemp, Ethier and his streak were palpably exciting and dramatically deficient only in the fact that Ethier rarely waited until his final at-bat to extend the skein. He reached Halfway to DiMaggio status May 2 and his 30th consecutive game May 6, going 3 for 5 against the Mets one night after his only missed game during the streak.

That missed game brought with it some foreshadowing, because it turned out that Ethier was suffering from left-elbow inflammation, raising fears that his 2011 season might play out like 2010 did.

The hitting streak ended May 7, with Ethier striking out against Mets lefty reliever Tim Byrdak in the eighth inning to go 0 for 4 (with a walk). The game was tied at that point, but the Dodger bullpen gave up two runs in the bottom of the eighth to prevent Ethier from getting a chance to extend the streak in extra innings. Ethier did continue his streak of reaching base for another week, taking it to 37 games before going 0 for 4 against Arizona on May 15. 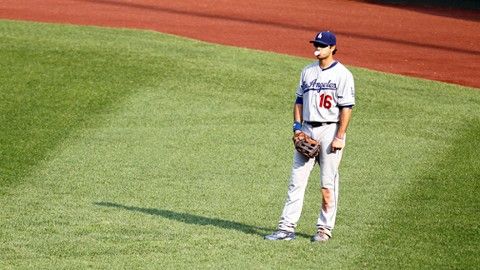 Ethier in September, days before his season ended because of knee problems. Ethier fell into a brief slump after the streaks ended, but for the most part continued to reach base at a high rate thereafter, especially after taking three starts off to rest his aching body (and also chill out a bit). From May 27 through the remainder of his season, Ethier had a .358 on-base percentage, almost equal to his 2009 mark. But the problem was that his power from 2009 had all but disappeared. Ethier's 11 home runs and 30 doubles in 2011 were his lowest totals since his rookie year, and his .421 slugging was by far the lowest of his career. In addition, his struggles against left-handed pitchers only grew worse, with a career-low .258 OBP, .305 slugging and .563 OPS.

Ethier's season ground to a halt amid more injuries (his right knee the latest culprit) and controversy over how they were being treated, though he kept battling at the plate until the end. On September 6, Ethier matched a season high (established one week earlier) with four RBI against the Nationals; with that, he called it a year. He had arthroscopic knee surgery on September 14, with a scheduled recovery time of six-to-eight weeks. In other words, Ethier should be 100 percent right now.

Nothing, arguably, illustrates how unpredictable Ethier's 2011 was than the fact that the right fielder, admired for his bat but often maligned for his defense, came away with one postseason honor: his first Gold Glove Award.

Coming attractions: Ethier, the pride of Ned Colletti's trading resume, the kid with the sweet swing beloved by scouts, turns a wizened 30 in April. That will kick off what will be his last year before free agency save a contract extension that, given an October Colletti interview with Jim Bowden for ESPNLosAngeles.com, doesn't seem likely to come. Nor, however, does there appear to be an Ethier trade on the horizon, though with a salary that should be somewhere in the neighborhood of $13 million next year, the player who has battled injuries for two years projects as the highest-paid Dodger of 2012.

Ethier's Dodger future, short-term and long, is uncertain. His on-field performance has to answer the larger questions of where his home-run power went and whether his production against lefty pitching will ever arrive. If those questions are answered sourly, 2012 will no doubt be his last in Dodger whites. More and more, people are wondering if the former MVP candidate is at best a platoon player extraordinaire. But a rebound year that ends with new ownership in place could set Ethier up for a renewed engagement in Los Angeles. Though few are talking about it now, Ethier will definitely be one of the Dodgers' biggest stories next spring.