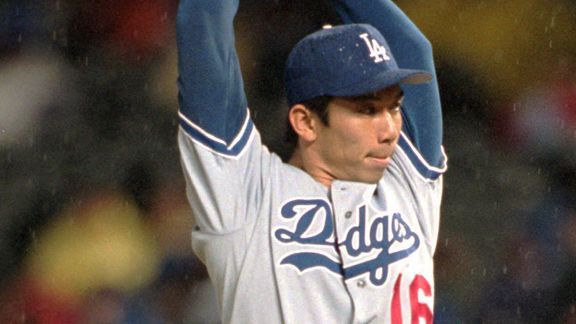 In the rain, Hideo Nomo faces the first batter in his September 17, 1996 no-hitter at Coors Field.

Former Dodgers Hideo Nomo, Bill Bergen and Lefty O'Doul are among the 10 first-time nominees for the Shrine of the Eternals, brought to you by the Baseball Reliquary.

Any member of the Reliquary can vote on the Shrine of the Eternals. An active membership costs $25 annually. Honorees will be announced in May, with Induction Day on July 15 in Pasadena.

Here are the 50 names on this year's ballot (with years on ballot in parentheses) – really a wonderful list – followed by the Reilquary's biographies of the 10 new nominees:

GARY BELL (b. 1936)—Immortalized in the pages of Jim Bouton’s Ball Four as a charter member of the beer-pounding, beaver-shooting Seattle Pilots, the good-natured, wise-cracking Bell (inevitably nicknamed “Ding Dong”) came up with Cleveland in 1958 as a “can’t-miss” pitching prospect, part of a strong staff that eventually included Mudcat Grant, Sam McDowell, and Luis Tiant. Bell posted solid if unspectacular numbers with the Indians for a decade until a trade to the Red Sox in 1967 placed him in the midst of their “Impossible Dream” pennant-winning season. The cheerful Texan is the answer to the perennially-asked trivia question: “Who was the winning pitcher in the Pilots’ first home game?”

BILL BERGEN (1878-1943)—Whoever first offered the canard, “I don’t care what my catcher hits; he’s in there for defense,” must have been thinking of Bill Bergen, a defensively superb dead-ball era catcher who would have been forgotten entirely if not for the fact that he holds the most dubious record in baseball history: lowest batting average ever—.170—for a player with 2500 or more at-bats; a record that makes latter-day lightweights like Ray Oyler and Mario Mendoza look like Ty Cobb.

STEVE BILKO (1928-1978)—Moon-faced first baseman who wrapped a so-so major league career around a legendary stint in the Pacific Coast League, where he paced the circuit in home runs for three consecutive seasons (1955 to 1957), and won the PCL’s Triple Crown in 1956 with a phenomenal display of slugging for the Los Angeles Angels. Astutely drafted by the expansion Angels of the American League in 1961, the extraordinarily popular Bilko made further inroads into pop culture immortality as the source for the name of the Phil Silvers’ character, Sgt. Bilko, on the actor’s television program.

BERT CAMPANERIS (b. 1942)—Speedy, durable shortstop for the Kansas City-Oakland franchise of the 1960s and '70s whose flash and flair embodied the spirit of the Swingin’ A’s. A six-time All Star who once played all nine positions in a single game, “Campy” in his prime was arguably the best shortstop between the Luis Aparicio and Dave Concepcion eras.

JOSE CANSECO (b. 1964)—Wayward Cuban-born slugger of prodigious gifts and blasé demeanor who, with fellow “Bash Brother” Mark McGwire, led the Oakland A’s back to respectability in the late 1980s. His open admission of steroid use throughout his career, documented in several tell-all books, made him a pariah in MLB circles after his retirement.

CHARLES “VICTORY” FAUST (1880-1915)—Few baseball tales are as odd—or ultimately, sad—as the story of Charlie “Victory” Faust, a gawky stringbean of a man who in 1911 managed to convince New York Giants manager John McGraw that he, Faust, was destined to pitch the team to a World Series championship, and furthermore had the talent to jinx opposing teams (“put the whommy on ‘em,” as Casey Stengel might have said). With Faust adopted by McGraw as team mascot/good luck charm, the Giants did indeed win the 1911 series, and Faust did indeed pitch in two meaningless games. Faust faded into oblivion after the 1912 season, dying in a Washington sanitarium in 1915, until his story was resurrected a half-century later by historian Larry Ritter. (More on Faust here.)

ANNABELLE LEE (1922-2008)—The poetically named southpaw pitched with four different teams in the All-American Girls Professional Baseball League (AAGPBL) from 1944 through 1950 and is credited with hurling the first perfect game in league history in 1944, adding a no-hitter to her credentials the following season. A Los Angeles native whose father played in the Pacific Coast League and whose nephew Bill Lee was a Red Sox legend, Annabelle Lee is part of the AAGPBL permanent display at the Baseball Hall of Fame and Museum.

HIDEO NOMO (b. 1968)—Credited with opening the door to Major League Baseball for native Japanese players, right-handed pitcher Hideo Nomo established himself as a star early in his career with the Kinetsu Buffaloes (1990-1994) before taking advantage of a contractual loophole to sign with the L.A. Dodgers. Using an exaggerated, jerky windmill motion (the genesis of his nickname “The Tornado”), Nomo became an overnight sensation in the U.S., ushering in the era of “Nomomania” while winning the NL Rookie of the Year Award in 1995. He became an itinerant pitcher after a few seasons with the Dodgers, and never really captured the nation’s enthusiasm again after his rookie campaign, but by then U.S. fans had other Japanese stars to cheer for—Ichiro, Matsui, Hasegawa, Matsuzaka, and many others.

LEFTY O’DOUL (1897-1969)—A man of many hats—most of them green, to match his favorite color of suit—the legacy of Francis “Lefty” O’Doul is so varied and accomplished as to defy neat description: a San Francisco native, still revered as a favorite son of the city (his sports bar is still a civic landmark), O’Doul began his big-league career as a relief pitcher, but re-emerged as a slugger after a reclamation stint in the Pacific Coast League. He terrorized NL pitchers during the late 1920s and early 1930s, won two batting titles, nearly hit .400 in 1929, and retired with the fourth-best career average of .349 in 1934. Returning to the PCL, he managed the San Francisco Seals through one of their most productive periods, mentored the young Joe DiMaggio, and established a reputation as one of the greatest hitting coaches in history. He also found time to work as a baseball ambassador to Japan, giving the professional game a leg up in that country. He is in everyone’s Hall of Fame except for the one that counts: Cooperstown.

TONI STONE (1931-1996)—Born Marcenia Lyle Alberga, Toni Stone played baseball from the moment she could walk, a standout player among local boy’s teams, American Legion squads, and black semi-pro outfits through the WWII era. Barred from play in the segregated AAGPBL, she was signed in 1953 by the Indianapolis Clowns of the Negro American League to play second base, a position recently vacated by Henry Aaron. She had her greatest thrill in baseball with the Clowns: a chance to bat against Satchel Paige. A victim of the sexism prevalent among all races during the era, her skills as an athlete were overshadowed by her value as a publicity tool, and after a stint with the fabled Kansas City Monarchs in 1954, she retired. She was inducted into the Women’s Sports Hall of Fame in 1993, and is memorialized in two separate permanent displays at the Baseball Hall of Fame.