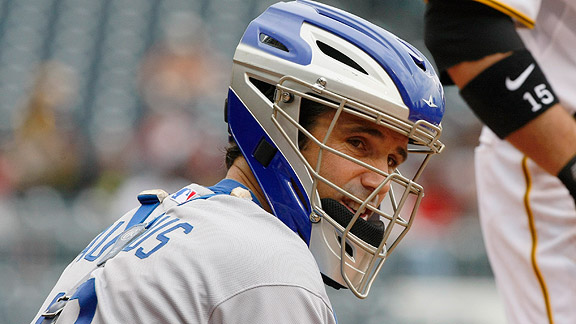 Russell Martin's unexpectedly quick recovery from Spring Training injury kept the Dodgers from having a catching tandem tonight of A.J. Ellis and Lucas May or J.D. Closser.

Ellis, who turned 29 Friday, has been recalled from Albuquerque to join the 25-man roster in place of Brad Ausmus, who has gone on the disabled list for the first time in his career with a pinched nerve in his back. Tony Jackson of ESPNLosAngeles.com has details:

... Ausmus said that while the injury originates in his back, it presents itself in the form of numbness all the way down his left leg, from his hip to his foot. The injury isn't related to a chronic lower-back problem Ausmus has experienced sporadically during his career, an issue that flared up again during spring training and caused him to be shut down for a week.

"The other day, when I was catching in Pittsburgh, about the eighth inning my hip started giving me some problems," he said. "I was hoping it was just a case of not having caught that much after missing a week of spring training. But over the next 18 hours, during any prolonged sitting or lying down, I would get a shooting pain down my left leg."

Ausmus said he had trouble sitting on the team bus to the airport after Thursday's game and on the charter flight to Fort Lauderdale, then had trouble sleeping that night. He woke up Friday morning feeling what he described as "pins and needles" in his foot.

The decision to place Ausmus on the DL actually was made before Friday night's game, but it was kept quiet so the Florida Marlins wouldn't know that Russell Martin was the Dodgers' only catcher. Ellis was scratched from Albuquerque's game at Oklahoma City during batting practice, but he wasn't able to get a flight until the following morning.

Ausmus, who will turn 41 on Wednesday, said he was disappointed that he didn't finish his career without a DL stint, but that he understood why it had to happen now.

"I'm pretty much at, or really close to, the end of my career, although who knows when it's going to end?" he said. "I was hoping to avoid it my entire career, but this time, there wasn't much chance of that. [Trainer] Stan [Conte] and [manager] Joe [Torre] knew there was too much risk involved in putting me into a game and that they would have to have somebody else here. The only way to do that was to put me on the DL.'" ...

Joe Torre told reporters this afternoon that Ellis would start Sunday's day game – the fourth start of his career and the second that has ever come before the month of September. Ellis will be catching knuckleballer Charlie Haeger, whom he caught in Albuquerque about nine times last season (if my quick scan of the minor-league game logs of Fangraphs is correct.)

Torre also said that Andre Ethier (a ripe old 28 years old today) won't start this weekend but might come off the bench, and that he is a possibility for the starting lineup at Tuesday's home opener. Manny Ramirez also will be held out of the starting lineup Sunday.