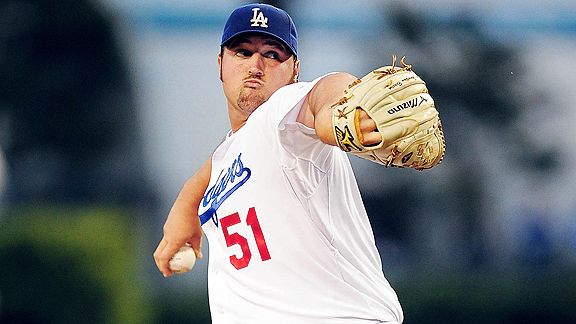 Jonathan Broxton, shown here Saturday when he was preserving a Dodger victory over the defending World Series champions on national television.I have to admit that thankfully, the tirade that comes from so many Dodger fans during the rare collapse by Jonathan Broxton has reached the point of amusing me more than upsetting me.

Prior to Sunday's game, Broxton had allowed one earned run in his previous 23 games (0.39 ERA) with no blown saves. In 33 games this season, he had allowed three earned runs and three inherited runs to score. He had surrendered two leads all year. He had over 50 percent more strikeouts than baserunners allowed.

The people come out and say none of this matters, because Broxton can't perform in the postseason. Even though he has in all but two games. Even though six of the other seven 2009 playoff teams saw their closer give up a lead in last year's postseason. Yep – every closer but Mariano Rivera blew a postseason game last year. (Rivera got his out of the way in earlier years.)

Really, you just have to laugh. People say I'm too quick to defend Broxton, but really, it's just so easy to do it. Where are all these other closers who never have a bad game? Where are they? Name one closer in baseball besides Rivera who is better than Broxton.