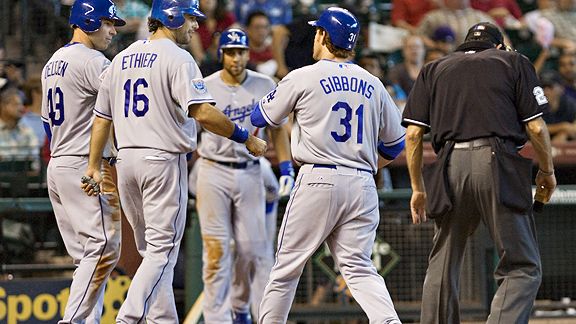 Will Jay Gibbons be receiving congratulations from fellow Dodgers in 2011?

The stories of Jay Gibbons and Rod Barajas have interesting similarities - two Southern California high school grads, cast off by other teams, who have thrived in the dog days of the 2010 Dodger season.

Neither player is going to price themselves out of the Dodgers' budget, however limited that might be, so at a minimum, Gibbons and Barajas should have a spot carved out on next season's bench. Barajas' playing time depends rather specifically on what the Dodgers do with Russell Martin. The Dodgers' third-outfielder situation is murkier; I don't think the Dodgers are simply going to hand left field to Gibbons – especially with his defensive limitations – but he certainly looks like a guy who could get at least 250 or so plate appearances next year. The bar is not high.

By the way, as the Dodgers look for a third starting outfielder next season, don't rule out that it could be a center fielder, with Matt Kemp moving to right field and Andre Ethier to left.