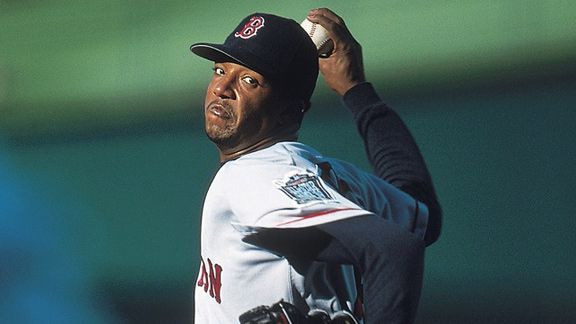 Pedro MartinezMy lack of anticipation for "The Tenth Inning," Ken Burns' and Lynn Novick's four-hour sequel (airing in two parts Tuesday and Wednesday on PBS) to Burns' 1994 documentary, "Baseball," could hardly have contrasted more to how eager I was to see the original.

That 18-hour documentary came out when Burns' glorious "The Civil War" was still fresh in my mind, came out during the work stoppage that caved in the 1994 baseball season and, perhaps most importantly, largely featured material from the distant past. Buck O'Neil, to whom "The Tenth Inning" is dedicated, made "Baseball" worthwhile all by himself.

By contrast, I wasn't in any hurry to relive post-1993 baseball via the Burns treatment. I didn't feel I had enough distance. (On top of that, "Tenth" figured to be exceedingly light on Dodger content, providing a reminder of how absent Los Angeles has been from baseball relevance for most of the past two decades.)

That latter concern was certainly borne out, but I will tell you that I did enjoy "Tenth" a bit more than I expected, with Burns (along with co-writers David McMahon and Novick) showing that at times, he can still deliver the goods.

But I did enjoy revisiting recent baseball history – being transported back to Fernando Cabrera's pennant-clinching hit or seeing names like Tony Gwynn celebrated once again – more than I expected.

"Tenth" also did a better job than I feared injecting nuance into the discussion of performance-enhancing drugs, a topic that permeates the four hours. Through its sources and narrator Keith "Goliath" David, "Tenth" provides a brief history of cheating in baseball, knocking down some of the holier-than-thou aspects of the debate, and explaining why, even as suspicions rose, people didn't really want to investigate.

And though Barry Bonds' story was somewhat sadly tiresome, the set-up wasn't: a focus on Bonds' father Bobby and how his troubled career shaped Barry, yielding the person who would stare unabashedly into the face of the disgust directed toward him:

"Boo me! Cheer me!" Bonds exclaims at a press conference. "Those that are gonna cheer me are gonna cheer me; those that are gonna boo me are gonna boo me. So what. But they're still gonna come see the show. ... Dodger Stadium is the best show that I go to in all my life in baseball. They say 'Barry sucks!' louder than anybody out there. And you know what, you'll see me in left field (encouraging them), because you know what, you've got to have some serious talent to have 53,000 people say 'You suck.' I'm proud of that."

There are moments when "Tenth" goes beyond the obvious to tell its stories, and those moments are pretty great.

However, particularly in the second part, there are also extended stretches in which the storytelling fails to reach any kind of height, stretches in which the storytelling is completely conventional, no more special than a run-of-the-mill sports documentary that gets thrown together without such fanfare. Because of this, I think that "The Tenth Inning" will be appreciated more by the casual fan than the dedicated fan (and, of course, enjoyed much more by fans of the teams depicted than the teams ignored).

"As its flaws become apparent, (baseball) actually gains depth and humanity, even as it loses its fairy-tale, mythic qualities," says sportswriter Thomas Boswell, who quietly emerges as perhaps the best on-screen voice of the documentary. Burns and his team get this concept, and I'm glad. The tone to the conclusion of 240-minute endeavor couldn't be more appropriate. I just wish "The Tenth Inning" had pursued more off-the-beaten path stories, stories like Buck O'Neil and Bobby Bonds, than spending so much time on the more familiar recent history that feels like it's been sitting on a warming tray.