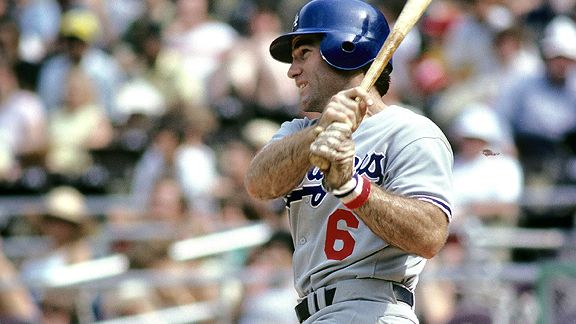 No. 6, Steve GarveyThe Dodgers, with only one exception, only retire the jersey numbers of Hall of Famers. So that's why the 34 of Fernando Valenzuela doesn't hang in the pantheon with Jackie Robinson's 42, Sandy Koufax's 32 and the like.

Valenzuela's 34 is in unofficial retirement, having not been worn by a Dodger since the team released the lefty before the 1991 season, but "unofficial retirement" is as equivocal as it seems. Steve Garvey's 6, for example, was unofficially retired for 20 seasons, only to be taken out of the safe for none other than Jolbert Cabrera in 2003. Since then, others to wear Garvey's number are Brent Mayne, Jason Grabowski, Kenny Lofton, Tony Abreu and Joe Torre. (For that matter, the No. 6 was originally made famous for the Dodgers by Carl Furillo.) 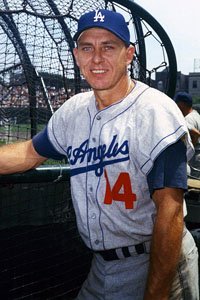 No. 14, Gil HodgesI've never had a problem with the Dodgers' retired-number policy, which was only ignored following the emotional passing of longtime Dodger player and coach Jim Gilliam during the 1978 playoffs. Ten numbers have been immortalized, and that has seemed like a plentiful number, one that spreads the honor around without diminishing it.

But over the weekend, I began thinking about the possibility that some of us might never see a Dodger uniform number retired again in our lifetimes. Think about it:

Certainly, any year could bring a future Dodger Hall of Famer, but chances are strong that in, say, 2028, we'll be marking the 30th anniversary of the last Dodger uniform being retired if the current policy remains.

So I just got to wondering whether it might be worth it to institutionalize a new era in retiring numbers. This is just brainstorming, but one idea I had was that every 10 years, one Dodger great who isn't in the Hall would have his number retired.

I'm curious about what your thoughts are on this subject, and also – if, hypothetically, my idea came to pass, which number you'd like to see retired next?