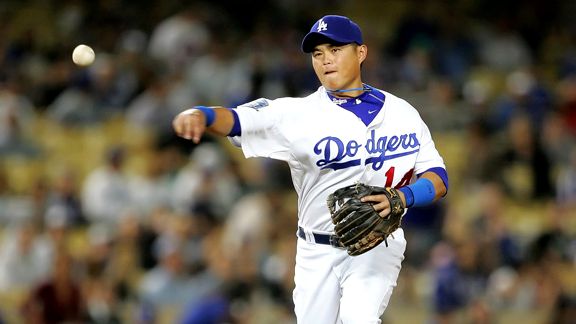 Chin-Lung HuChin-Lung Hu's days as a Dodger prospect are over. After eight years in the organization, Hu (27 in February) was traded today to the New York Mets for 25-year-old minor-league lefthander Michael Antonini.

Hu hasn't shown any potential with the bat since 2007, when he had an on-base percentage of .364 and slugging percentage of .507 in Double-A and Triple-A combined. In his major-league career, Hu has a .241 OBP and .283 slugging over 191 plate appearances. Nonetheless, he could be Juan Castro for some team, and I always thought the Dodgers could be that team.

Ultimately, Hu was out of options and there were doubts he'd make the Opening Day roster, so this is a way of salvaging something for him, given the odds against him.

Hu leaves Los Angeles with the most plate appearances (191) of any Taiwan-born player in major-league history, ahead of Hong-Chih Kuo (36) and Chin-Feng Chen (25).