With training camp around the corner, we asked a group of local and national roundball experts to weigh in on some of the big questions about the Lakers heading into the 2010-2011 season. Call it a preseason prognosticationpallooza. 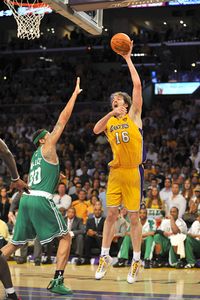 The Celtics were the biggest threat in a seven game series for last year's Lakers. Our panel of experts sees more of the same this season.

Which Eastern Conference team has the best chance to beat the Lakers in a seven-game series?

My Take: Miami... Boston... Miami... Boston. On the one hand, hype notwithstanding I do feel Miami will finish the season as the Eastern Conference's top seed. On the other, until I see how they stand up to a strong front court, can you say they're a bigger threat to L.A. than the Celtics? I'll take Pau Gasol on both ends vs. Chris Bosh, and what does Miami do with Lamar Odom and Andrew Bynum? Maybe I'm just trying not to grant too much, too fast to the Heat, but the playoffs are about matchups, and Boston still lines up better against the Lakers.

Andy Kamenetzky: I won't extend Miami this much benefit of the doubt until they actually play a possession together. (I happen to think the Lakers match up extremely well against them on paper, but that's beside the point.) And with all sincere respect to the tough Finals Boston just provided, they're looking old to me. Thus, I'll take Orlando, who should be motivated after a disappointing, somewhat dispirited playoffs and have quality -- if sometimes unbalanced -- inside-outside assets.

Soriano: While Miami poses the best hypothetical threat due to their extreme talent base, I still have to go with Boston. Yes the Celtics have aged a year and adding the O'Neals [Jermaine and Shaquille] doesn't make them any younger. But that team defines the term "tough out" and we all saw how hard the Celtics pushed the Lakers in last year's Finals. Granted, the Celtics will have to get to the Finals first but if they do I think they'd present the toughest challenge and would have the best chance of winning the series.

Clark: By process of elimination, it has to be Miami. Chicago's improved, but the Big 3 in the East remain the same (subbing Cleveland for Miami), and the Lakers have beaten the other two in pretty much their exact current state. Miami remains the unknown, and therefore the greatest threat to the Lakers.

Helin: Miami will be good, but I think they match up well with the Lakers. The biggest threat would be a healthy Celtics team. They pushed the Lakers to seven games last season and the addition of the O’Neals (Shaquille and more importantly Jermaine) gives them depth up front they needed in that Game 7.

Medina: I would say Miami simply on its talent level. But I think the Heat will fall short simply because of chemistry issues that are almost inevitable when constructing a team filled with talented athletes who haven't played around one another enough yet. Though the Celtics' window of opportunity is closing, they still have the pieces to try to avenge the 2010 Finals loss.

McMenamin: Boston. The C's were about a half a quarter away from beating L.A. to win the championship last June and added the O'Neals in Shaquille and Jermaine. They have the size, they have the experience and they have clutch guys in Paul Pierce and Ray Allen who can match Kobe Bryant shot for shot. Miami and Orlando would be formidable Finals foes as well, but Boston is better equipped to unseat the back-to-back champs.