NOTE: Our colleague Dave McMenamin is with the Lakers in Europe. Here's his latest update: 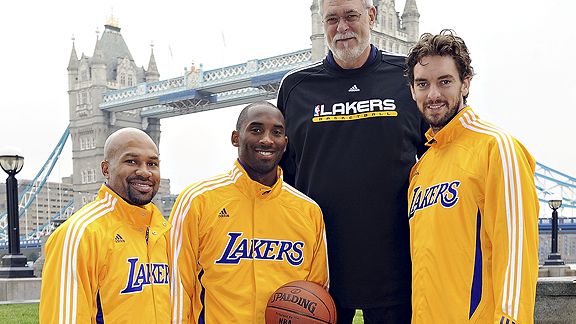 Don't count on the Lakers making an annual trip to London any time soon.

LONDON – The O2 Arena in London offered as many of the Staples Center staples as it could to make the Los Angeles Lakers feel at home Monday night, but that doesn’t mean that the team will be coming back for a return visit anytime soon.

It hosted the Lakers’ 111-92 preseason loss to the Minnesota Timberwolves as a part of the NBA’s Europe Live promotion and played the same soundtrack one hears at 11th and Figueroa in L.A. -- Van Halen’s “Right Now” as the team first takes the floor; The Who’s “Baba O’Riley” during player introductions; Black Eyed Peas’s “I Gotta Feeling”; and it even blasted the same instrumental verse that Staples Center uses for it “Lakers Legends” videos when James Worthy was introduced over the P.A. system during a break in the action.

Considering the venue is owned by AEG Worldwide, the same company that owns Staples Center as well as manages privately held shares of the Lakers franchise, having the Lakers make an annual appearance at the arena would seem like a natural fit.

But when asked about the possibility of L.A. making London its temporary home as an annual event, AEG President Tim Leiweke replied, "Have you talked to Phil [Jackson]? Not going to happen."

The Lakers coach explained Leiweke’s comment after the game.

“I was supposed to retire last year and someone else was supposed to be doing this job this year but I fooled everybody and came back and took the punishment,” Jackson said.

It is no secret that the 65-year-old Jackson prefers to avoid long flights when possible because of the negative affect it has on his hips and knees. He has recently passed on the Hall of Fame induction ceremonies of former players Michael Jordan and Scottie Pippen and also missed the New York Knicks’ celebration of the 40th anniversary of the 1969-70 championship team, in part because of the extensive travel involved.

“Some of it’s been basically been my condition, flying, etc.,” Jackson said.

Jackson said that the last international trip one of his teams planned was supposed to take the Lakers to China in 2001, but it was cancelled after the terrorist attacks of Sept. 11.

Despite saying Lakers training camp would be “a bust” before it even began because of the added, non basketball-related activity that comes with a preseason trip to Europe, Jackson has enjoyed himself on the London leg of the trip, happily snapping photos of Tower Bridge on his cell phone on Monday afternoon after the Lakers posed for an official team shot near the monument.

“We’re happy we’re able to come, but not happy we gave such a poor exhibition,” Jackson said.

NBA Commissioner David Stern said that even if AEG and the Lakers agreed to play at the O2 Arena every season, the league has final say on which teams play abroad and prefer to spread out the invitations among its 30 teams.

“We actually like to rotate our teams, we really do,” Stern said. “We think it’s great for our players. They enjoy it. They understand that it’s now part of their expected program. It’s enormously helpful to them and for us to see the impact they have on youngsters around the world. It continues their education.”