Earlier in the month, Kobe Bryant raised eyebrows by predicting himself the obvious winner in a theoretical game of one-on-one with LeBron James. To some, the claim felt like Kobe simply exuding confidence and making a certainly believable case while recognizing Lebron's all-around game. To others, it felt like an alpha male dog dismissive of the pup closest to assuming his dominance in the pack. (A pup who also happens to be ridiculously strong, huge and fast, by the way.) 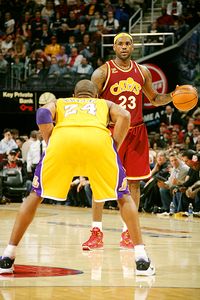 We need to make this happen for real, people!

To the stats folks, however, the claim like an excuse to bust out old game footage, some paper and a pencil. ESPN researcher Alok Pattani, through an assist from Synergy Sports Tech's video tracking, examined every possession over the last six seasons where The Mamba and The King guarded each other on ball in "isolation" situations, the closest an NBA game offers to a "one-on-one" contest. There have been seven total meetings where this scenario has presented itself.

And here are the numbers: Kobe has scored 20 points (free throws included) on 27 isolation plays when guarded on-ball by LeBron, while LeBron has scored seven points on 13 isolation plays when guarded by Kobe. Bryant shot 9-for-28 from the field with two turnovers, while James was two-for-eight with just one gaffe. Finally, on a points-per-play basis, Kobe is ahead .74 to .54.

So do these numbers provide the definitive proof Bryant would school James one-on-one? Not necessarily (although in the interest of full disclosure, like Brian, I would lay my cash on Kobe at a Vegas betting window).

Remember, these figures were determined from very small sample sizes. Tiny. Darn near minuscule. Forty iso's in all. You're talking an average of about one attempt per game from James and just four from Bryant. Plus, isolation plays may be the kissing-est cousin the NBA has to one-on-one play, but it's not the same thing to being on the floor with four other guys per side, trying to operate against a defender while working within a system, being mindful of the double that may come and who you'd pass to if it does ... and on down the line with every wrinkle presented during an actual league outing. In-game situations don't replicate the single-minded nature of playing one-on-one, so it would be foolish to let these figures convince you otherwise.

The stats are quite intriguing, if for no other reason than revealing how little these two have spent checking each other on an island. As tidbits for a never-ending barroom debate, fantastic stuff. But in a vacuum, the numbers "prove" nothing.

Having said that, there is one nugget gleaned from these stats I'm confident would be indicative of a future tango: Low percentages from the field.

Kobe and LeBron may be elite scorers, but they're hardly slouches on the other side of the ball, either. There is a mutual pride in lockdown skills, and knowing Kobe, I think he'd take more pleasure in preventing a LeBron basket than racking one at his expense. I wouldn't be surprised if LBJ felt the same. We'd all be witnesses to two guys defending the living snot outta each other. Thus, no matter who won, easy buckets wouldn't exist, and I'd count on way more misses than makes. We're talking about an epic dog fight for the ages.

Just one more reason David Stern needs to make this fantasy a reality.

C'mon, Commish! You throw your weight around like a schoolyard bully for everything else. Might as well pound the iron fist in a way guaranteed to boost your approval rating.