Staples Center was filled Sunday with any number of goblins, witches, dudes in prison garb, bumble bees, cowboys, cowgirls, a fella in a Mr. Incredible outfit, another dressed like that Hamburger Helper hand, and superheroes, plus someone dressed like Trevor Ariza (actually, that was Devin Ebanks). 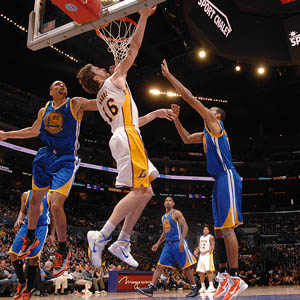 Pau Gasol was once again a monster inside for the Lakers, scoring 26 points to go with 12 rebounds and four assists. Sounds like a full night.

It was, of course, Halloween, but while there was all sorts of spookiness in the air, plus ghost-shaped cookies in the media room, none of the scary stuff extended to the court for the Lakers. They raced out of the gate, opening up a 20-point lead after one, and tossed it in cruise control from there.

All in all, a very strong night. One even in which Kobe Bryant proclaimed his knee 100 percent (so stop (beeping) asking). Is he telling the truth? Doubtful, but it's certainly reasonable to believe he's bending the curve in the proper direction. Here's the box score, and the Lakers Live! replay. Read on for the breakdown.

Sweeter than any Halloween candy (note the organic holiday reference).