After Milwaukee, after Miami, after San Antonio, after all the talk of playing the right way, this simply shouldn't happen. It's one thing to lose -- that'll happen -- but Sunday night the Lakers came out flatter than a crepe and save a quick, totally temporary push to start the second half, never livened up.

To paraphrase the Comic Book Guy, "Worst loss ever." 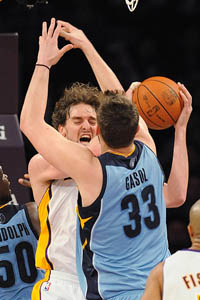 Unfortunately, most of the Staples faithful made this face watching Pau Gasol and the Lakers on Sunday night.

Here's how it broke down, bad news first.

Three Down: Wow. So many choices. I feel like a 74-year-old standing in front of the buffet at Sizzler. Paralyzed by choices.

Below are Sunday night's trio, but the list is limited more by time and format than any reflection of the team's performance. (For example, Ron Artest's zero-point, three-turnover night? Duly noted.)

1. Pau Gasol. I realize my fantasy team isn't a top priority for most Lakers fans, but that Gasol is currently hurting my squad means he's hurting yours as well. Sunday night, save a few plays early in the first quarter, Pau completely lacked any snap. The Lakers rely on him to be not simply a producer of points but also a pivot point for the offense, helping take the burden off Kobe Bryant. Sunday, in that role, Gasol turned the ball over five times, whether making bad passes or, as it was in the fourth quarter, being physically bullied off his spot and forced into a travel. Defensively, he was often a step slow, or simply slow, as it was on a listless, barely-there contest of a critical corner 3 from Rudy Gay, helping quash what was a solid run for the Lakers. I have no idea if a better close would have prevented the shot, but we'll never know.

Phil Jackson said afterward that he thinks a lack of involvement hurt. "The game got to a point where we didn't use our strengths, which is our inside players," he said. "Pau gets nine shots in the course of a game. Some of it's his own responsibility, but we didn't use that focus that we have in a ballgame. When we started off the game, Pau got six out of our first eight points, and he didn't score again in the half. He ended up with 10. He got four more points in the second half. He's too good of a player for a game like that."

Certainly the game flowed away from him, particularly in the third, when Kobe did what he could to add energy and bring the team back. Still, something seemed off, and it's something we've seen for a while now. Sunday night's performance wasn't all that different from many we've seen during the past month or so. What ails him, I'm not sure. I asked Jackson whether Gasol is healthy. He said yes, but also said that as recently as the Miami game, Gasol lacked a solid base on his shots. Could there be something going on with his problematic hamstrings? Don't know. Mentally, his patience when things go away from him seems shorter, his frustration more palpable. Perhaps that's what's bleeding into his quality of play. Whatever the cause, he's a major reason the Lakers haven't been able to create consistent offense or make traction on D.

For the Lakers to be a great team, Gasol also must play like the All-Star he is, working through moments of frustration either at officials or the offense. Conversely, the Lakers need to make sure the opportunities are there throughout all 48 minutes of a game.

The same principle applies to their inside game, generally.

2. Turnovers, transition, second-chance points. In the first half, the Lakers fueled the Grizzlies' attack with some very generous play. On the glass, they allowed six offensive rebounds, contributing to nine second-chance points. Ten turnovers helped the Grizzlies to nine fast-break points. In the third, the Lakers cut down on turnovers but still were a swinging gate in the open floor. Some of that was because of how their offense operated (see below on Kobe's third quarter), but much of it was poor play of the garden variety. In the end, the Lakers gave the ball away 20 times, leading to 18 points for the Grizzlies, and they were fortunate it wasn't more.

"We can't turn the basketball over," Andrew Bynum said. "Out of the triangle, we have three guys on the baseline, so when we turn the basketball over, it puts us at a super big disadvantage. ... Especially with that first unit that's in there, with Pau and myself, kind of slow-footed getting back. It's causing a lot of problems, so we've just got to take care of the basketball so that doesn't happen. We have to sit these teams down and make them play 20 seconds of defense. Really work the ball so that it fuels our defense."

It's not just what Memphis gets on the offensive end, either. Twenty turnovers means 20 trips the Lakers don't shoot, which helps explain another frightful offensive performance. Memphis finished the game with 19 more field goal attempts than the home team.

On a night when they had no pop, to fail in these areas isn't exactly a surprise.

3. Shannon Brown. The team's problems could be summarized by a horrible fourth-quarter pass from Brown to Kobe. Shannon brought the ball up the floor, quickly glancing at Kobe before lofting a slow, lazy pass in his direction, assuming it was clear. Well, we know what happens when you assume. Gay jumped the pass and went the other way for an easy finish. Kobe, looking appropriately disgusted, never moved off his spot. But the night had gone haywire for Brown long before, as he displayed some of the lesser tendencies weighing down his game last season: too much dribbling, questionable shot selection and drives to the basket that are the basketball equivalent of the Bridge to Nowhere. (In the first half, Brown barreled into the paint from the right wing, found himself caught in the air and proceeded to throw a pass behind him to a well-dressed fan in the front row.)

He led the bench with 11 points, but it was not a good night.

1. Andrew Bynum. The message, as it is sent to him, is always simple: rebound and defend. Clog the lane, be a presence. Then, if you have a few moments, score. His trajectory has been slow and steady in a positive direction since his return to active duty, and Sunday's game was definitely another great step. It wasn't spotless, but in 27 minutes, Bynum produced 11 rebounds and five blocks along with nine points. The range of his impact defensively could be seen in the second quarter, when Bynum wiped out a Mike Conley layup attempt with a block, then recovered fast enough on penetration from Tony Allen to force a pass, allowing just enough time for Lamar Odom to close on Hasheem Thabeet, earning a block of his own. Later, he made a great play off the weak side in support of an undersized Odom in a mismatch versus Marc Gasol, blocking lil' brother's shot.

2. Kobe Bryant. There are nights when you watch Kobe try to single-handedly shoulder the burden of L.A.'s offense and scream at the television (see Antonio, San). Other times, as it was Sunday night, it seems totally justified. With the Lakers stalled out after the first half, scoring all of 39 points and showing few signs of turning things around, Bryant did what he could to get the Lakers back in the game: 17 points in the third quarter, on 6-of-12 shooting from the floor. He aggressively probed off the dribble against a tentative Memphis D unwilling to get too close, doing most of his damage from midrange and the paint. Defensively, he sparked an early third-quarter run with a steal and finish and was still hitting the floor to try to gain possession even after the game started slipping away from the Lakers.

It wasn't all sunshine and lollipops, as many of Kobe's shots sent Memphis off in transition, and the Lakers, already without any sort of flow, lose more of it when things turn Kobe-centric. But I didn't see much of an alternative. Nobody criticizes a skydiver for yanking his emergency chute when the main one malfunctions. Sunday, Kobe played a parachute of last resort.

The 10-of-22 shooting line wasn't red-letter-worthy, but this was hardly a night when an accusatory finger can be pointed at Bryant. He did his job and unfortunately had to do the jobs of a few others, too.

Much, much more to come.