Call it a Tale of Two Halves. In the first half, the Lakers played fairly solid ball, save a couple of minutes in the second quarter. But in the second half, the third quarter in particular, the wheels came off the wagon. Turnovers, poor decisions on offense, breakdowns on D, and some white-hot shooting from Jason Kidd and Jason Terry did them in.

Dallas owned the last seven minutes of the third quarter, and continued its domination into the fourth. The Lakers tried to make a late push, but the hole was too deep. The Mavs picked up a win they were desperate to get, while the Lakers missed a chance to keep a Western Conference rival, slumping but healthier now with the return of Dirk Nowitzki, on the mat for another night. Perhaps most disappointing was the lack of pushback from the visitors. They had no answer for what became an extended run for the Mavs. 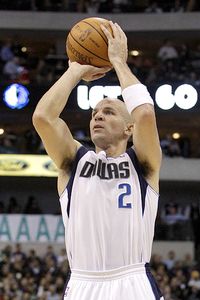 Jason Kidd came into the game having missed 14 of his last 16 three-pointers. Tonight... problem solved!

Here's how it broke down. Literally...

1. Second-Quarter Lapse. With a 10-point lead at the 5:40 mark, the Lakers lost discipline on both sides, hurrying shots offensively, and missing rotations at the other end. Over the next 2:30, Dallas ripped off an 11-0 run to take the lead.

To their credit, the Lakers pushed back, getting three baskets from their bigs (two from Pau Gasol, one from Andrew Bynum on a slick bounce pass from Gasol), and another FT from Gasol to regain the lead and eventually went to the locker room up by four. But they controlled the first half throughout, and without that slip probably could have had more than a four-point lead.

2. Third-Quarter Turnovers. In the first half, the Lakers turned the ball over twice. In the third, they racked up seven, helping fuel a mid-quarter 15-5 run for the Mavs, giving them the lead midway through the third, and a 15-4 run to finish the quarter. Every TO didn't lead to buckets the other way for the Mavs -- though plenty of them did -- but that's seven possessions in which the Lakers didn't get to shoot. Handing the rock over seemingly every other trip sucks the rhythm from the offense during those trips in which the players actually manage to hang on to it, too.

All told, the TOs help explain why the Lakers scored only 17 points in the period, including a wretched four over the final 4:30, and saw a seven-point lead with 7:26 left in the quarter become a nine-point deficit heading into the fourth.

3. 3-Point Defense. The Mavs started ice cold from beyond the arc, missing eight of their first 10, but from there absolutely went off. Nine of their next 13 found the bottom of the net, including four in the decisive third quarter. Too many were of the uncontested variety, or came off a scrambled defense because of turnovers at the other end, or problems against the pick-and-roll, which created all sorts of mismatches for the Lakers, all over the floor.

By the time Terry canned a late-clock 3 halfway through the fourth -- I'm not sure he was even looking at the basket -- the Mavs were up 16 and firmly in control of the game. They'd finish 12-of-26, a rock-solid 42 percent. Again, this after starting 2-for-10.

4. Luke Walton. With Matt Barnes on the shelf, Walton is going to get more minutes. When he plays, his primary function is to move the ball. In the first half Wednesday, he picked up two quick fouls -- not much help -- and in the fourth launched two ill-advised jumpers early in the clock, the latter leading to an easy run-out and layup for Shawn Marion, bad enough to prompt a timeout from Phil Jackson just to get him out of the game.

Toss in two points from Shannon Brown, and the Lakers didn't get enough help from the non-Lamar Odom portion of the bench.

1. Early offense: Over the first 12 minutes, the Lakers scored 31 points, on 62 percent shooting from the floor. They had assists on eight of 14 field goals -- four coming from Kobe Bryant -- and had points from seven different players. Monday's hot shooting from Derek Fisher carried over, as he hit three of his first four, including a 3 from the left wing, and a pair of rhythm jumpers. Kobe, who didn't have a field goal until the second quarter against the Thunder, also hit three of his first four. There was plenty of balance, as well, with all five starters logging at least three shots.

2. Lamar Odom. He broke out the full array Wednesday. He hit his first shot -- a 19-footer from the left wing -- then quickly set up Fish for 3. In the second quarter, helping lead a strong run for the reserves, Odom was extremely effective, particularly when the Mavs tried to zone up the Lakers. He cut hard to the lane, fielding a nice pass from Gasol for a dunk, then following a Gasol miss for another slam. And all the while, he was rebounding up a storm. Eight of them by halftime. 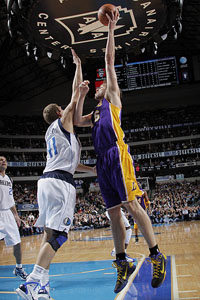 Don't blame me. I voted for Kodos (and had 23 points and five dimes, plus two nice blocks on Dirk inside).

In the fourth when the Lakers tried to make a push, Odom was huge, notching a four-point play when Jose Juan Barea fouled him on a triple, then going coast-to-coast for the and-one. He'd finish with 20 points and 10 boards, but it wasn't enough.

3. Pau Gasol. Like Odom, he showed the full compliment of skills, but after a slightly slow start from an aggression standpoint, he started putting the ball on the floor and making Dirk work (plus, taking advantage of Brendan Haywood when offered the chance). He had 17 points at the half, on a very tidy 8-of-12 shooting from the field, 13 of which came in a dominant second quarter in which he made six straight shots. Jumpers, hooks inside, an offensive rebound/putback. Plus, he flashed his passing skills, flicking a touch pass off a high screen with Kobe to Bynum for a dunk, then finding Drew again with a nifty bounce pass for an easy deuce to help stem a late-half Dallas run.

In the second half, his confidence was evident. He blocked Nowitzki early in the third, and soon followed with an aggressive move in the lane on Dirk, working with his right hand on the block before spinning quickly and finishing with his left. At the other end, he was a large reason Nowitzki's game was off most of the night. At one point, Dirk was 3-of-12, and finished 5-for-15.

Gasol finished with a team-high 23 points on 11-for-18 shooting, plus 4 assists and 2 blocks. Combined with the nice D on Nowitzki, it was among his best games of recent memory.

3. Steve Blake. As was pointed out in the Lakers Live! chat, Blake's three shots at halftime amount to a veritable explosion of ball-hogging. Laugh if you'd like, but those three shots are more than he has taken in the three previous games combined. The Lakers need Blake to find his shot when it's available. He'd finish with four attempts, making three, a nice step toward making teams respect him as part of the offense.

4. Kobe Bryant. I wrote last night how efficient he has been over the past 12 games. Tonight, he was productive from the floor (10-of-18), but as he was against the Thunder, Bryant was effective as a facilitator. I mentioned the four dimes in the first quarter, a sharing-is-caring tone he extended into the second half, assisting on the first two buckets for the Lakers (the first being a nifty drop pass to Bynum in the lane).

In the fourth with the Lakers down, Kobe tried to turn on the offense, to mixed results. Some forced shots, some good ones, some nice setups, and a couple of misplays. But by then the game was somewhat in a shambles for the Lakers, and overall the shooting night plus 10 assists was pretty productive. If there's a distressing number in the line, it's the two free throws, which didn't come until the fourth quarter. For Kobe to pile up points, he needs to get to the line.