Two of the Lakers' three opponents are above .500, a trend which will continue throughout the rest of the regular season. With the schedule growing increasingly difficult, the Lakers will need to continue bringing the A-Game displayed against the Nuggets in Denver. This week is as good a time as any to build a steady foundation.

With all due respect to a Christmas Day game against the Evil Super Team hyped as containing the fate of western civilization in it's balance, this is the biggest regular season game the Lakers will have played to date. Even more than contests against the Heat, the Thunder or the surging Spurs, a date with the Celtics, quite simply, is the one matters most, and beyond the juicy plot lines immediately jumping to mind:

Beyond the inherent rivalry, reborn after two decades of stagnation with two meetings in the last three finals . . . 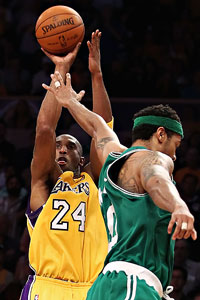 Kobe and the Lakers can never expect an easy contest against the Celtics.

Beyond Kendrick Perkins' bold claim the Celtics would have beaten the Lakers if he'd been healthy (which is certainly reasonable, if fairly shortsighted, considering how easily the same could be said about the Lakers in 2008 with Andrew Bynum available) . . .

Beyond the presence of a certain 7-1, 325 monster whose history with the Lakers (and Kobe Bryant) is equal parts glorious and antagonist . . .

Even beyond Von Wafer coming off the Celtics' bench with the goal of burning the team that drafted him . . .

All hype aside, this is the biggest game of the regular season for the Lakers for reasons more sobering than sexy. The Lakers haven't been playing like a team with rings on a consistent basis and the Celtics are again serious championship contenders.

Yes, the individual matchups intrigue: Kobe vs. the Celtics strong-side team defense. Rajon Rondo vs. whichever Laker(s) guard him. Pau Gasol and/or Lamar Odom vs. Kevin Garnett. Andrew Bynum and/or Gasol vs. Shaq. Ron Artest v. Paul Pierce. Ray Allen vs. his wildly erratic shooting against the Lakers last season. Shrek and Donkey vs. a Matt Barnes-less bench. And on down the line.

But at the end of the day, this game matters for the Lakers because a loss here, particularly a bad one, wouldn't shake the Lakers to their core, but could certainly provide a reality check about how much work lies ahead in order to keep the O'Brien in Los Angeles.

And if it didn't, that's an even bigger reason for concern.

During their first meeting at Salt Lake, the Lakers fell short in what I felt was a fairly good overall effort. Recent four-game skid notwithstanding, the Jazz have enjoyed a quality season, and Energy Solutions Arena is never an easy place for the visitors. And most importantly, Bynum was still in street clothes, robbing the Lakers of the full complement of length typically overwhelming the Jazz over the last few seasons.

The rematch will feature a purple and gold three-headed monster, and beyond the overall effect of size intact, I'm curious to see how the matchup between Bynum and Al Jefferson shakes out. 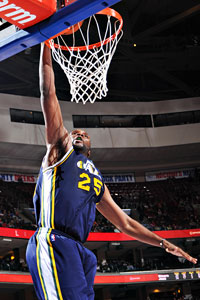 How will Big Al succeed against the

Lakers with Bynum in the fold?

Based on pure skills, unless Jefferson has improved significantly in his time under Jerry Sloan, Drew is considerably more capable as a defender of shutting down Al than vice versa. On the flip side, Jefferson remains a handful and Bynum has encountered his share of struggles these days avoiding whistles. He is averaging 3.4 fouls per game in 27 minutes throughout January, and has collected four or more in four of his last five games. Drew's effectiveness against Jefferson will obviously be dictated by his ability to stay on the floor, so he'll need to figure out a way to defend without racking personals.

And FYI, Chris Mannix of Sports Illustrated reports "lack of effort" chief among the problems cited during the Jazz's current malaise. Similar to the prognosis in Big D last week when the Mavericks were dropping games left and right. Sound familiar to anyone? My point isn't to excuse the two-time defending champions during the periods when their engagement, mentally or physically, clearly wasn't up to snuff. I just think it's good to remind the Laker Nation every now and then how their team isn't unique in this shortcoming, because it can be difficult to remember at times.

At the season's outset, I pegged the Kings as a team unlikely to make the playoffs, but at least on the right track towards improvement. I got half of the prediction correct. Sacto remains one of two teams with single digits in the win column (Hello, Cleveland!), and their 2-8 clip over the last ten games indicates a tunnel with little if any light at its end. The red flags over DeMarcus Cousins' immaturity appear warranted, and when it comes to the rook's matchup against the Lakers, forget how well he plays against Gasol or Bynum. The fifth overall pick was outplayed by Derrick Caracter when last the Kings graced the Staples Center floor.

The key for the Kings will likely be the efficiency of Tyreke Evans, and based on an admittedly small sample size, the Lakers are in good shape. Evans' career splits against the Lakers feature some of his least impressive numbers and talented a player as he is, the muscular Sacto combo guard is the ideal matchup for the equally physical Ron Artest.