Out of the gate, it looked like the Lakers would, for a second time this season, run the Hornets out of New Orleans Arena. L.A. built up early double digit leads on more than one occasion, but by the third quarter found themselves behind, thanks to some jenktastic defense in the middle two quarters. To lose the first of a seven game trip after holding a firm grip on the game would have been brutal, but give the Lakers credit: They tightened up late, and pulled away.

1. First half offense. A few of L.A.'s 22 first half field goals (on 39 tries, good for over 56 percent) were fortunate. Lamar Odom and Pau Gasol each hit some very tough floaters in the mid-post late in the shot clock, for example, but for the most part the Lakers posted an offensive efficiency of 140 over the first 24 minutes (thanks for the number, Forum Blue and Gold!) thanks to top shelf shot selection, good ball movement, and better recognition. Start with the first bucket of the game, where the Lakers found Andrew Bynum with Aaron Gray in his hip pocket, in great position. Nice feed, easy move, bucket. Or Kobe Bryant setting up Marcus Thornton in the mid-post, feeling what was supposed to be a double from David Andersen and casually spinning away from the paint before rising and kissing the jumper off the glass. Or a great sequence in which Gasol kicked from the right block to Derek Fisher in the corner, only to instantly get the ball back as the Hornets lost defensive spacing. Dunk. 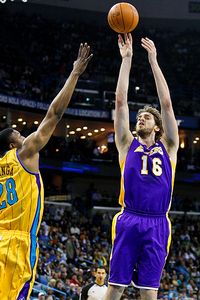 Pau Gasol, once again, had a field day against the Hornets.

In all, they managed 13 assists on the 22 makes, and had the sort of rhythm helping their best players to a solidly efficient half. Kobe was six-for-nine, Gasol eight-for-11. To some degree, the Lakers continued playing well on that end as the game continued, but the first half was about as good as it gets, particularly when it comes to play from their two best players.

2. Turnovers. One reason the Lakers were so effective offensively (and didn't inflict more damage on themselves at the other end) was because they took care of the ball. Only one in the first half, only three heading into the fourth. They'd finish with four. Obviously the defense itself was a problem after a strong first quarter, but imagine how things would have gone had New Orleans been granted more than four points off turnovers?

3. Pau Gasol. I mentioned his monster first half, filled with serious efficiency. Impressively enough, Gasol actually was even more accurate coming out of the break. He hit five of his six shots in the third quarter, plus a trio of free throws, good for 13 more points (and leaving him with 32 going into the fourth). He'd finish with 34, using the full slate of his offensive talents. Jumpers, floaters, a couple dunks, and a slick play in the first half putting the ball on the floor against David West for a reverse layup. Moreover, Gasol was active off the ball, moving well and making himself available all over the floor.

Even better, Gasol was aggressive. He felt good, and kept firing, demanding the Hornets do something about it, and they couldn't. Too often, Gasol won't call his own number, but since his pre-Houston chat with Kobe, he seems to be doing it more.

"I just got into a good rhythm," Gasol told KCAL's John Ireland. "I was feeling every shot, and everything was going in."

4. Ron Artest's Defensive Aggressiveness. He opened the game with a pair of steals, jumping a lazy pass from Gray before relieving Marco Belinelli of the basketball. He'd add another pilfer, plus three blocks (one coming on a pure hustle play after Artest found himself on the floor after a mashup under the bucket. He got up, recovering in time to chase down Willie Green and swat the ball away. He had his hands on a ton of balls, creating tips and deflections.

5. Kobe Bryant. His shot (and shot selection) cooled a little in the second half, when Bryant missed nine of his 13 hoists, but the overall line- 32 points, nine rebounds, five assists, and a block- was still top shelf. So were eight trips to the line. We'll always talk about Kobe's closing (and he did hit a big three in the fourth, see below), but tonight he showed from a scoring standpoint, his impact in the first half matters just as much as how he "takes them home."

6. Sandwich Defense. Tonight, the stuff working well for the Lakers came in the first and fourth. Call it the bread, if you'd like. In the opening quarter, keyed in part by Artest's handiwork, the Lakers held the Hornets to 16 points. In the fourth, with the offense beginning to bog down against what has been a very strong Hornets defense all season and after two quarters of, to put it mildly, loose defensive execution, the Lakers stiffened up considerably. "We got the ball stopped in the fourth quarter. They were breaking through and [Chris] Paul was getting what he wanted off crossovers, getting back to the middle of screen rolls. We started getting the ball stopped in the fourth quarter," Phil Jackson said. "We moved up on the screener so he didn't have as much room. A couple times we trapped them in the corner because we closed that space,and a couple times he had to go another place- around, rather than into the middle of the lane."

New Orleans had only six field goals and 16 points, one three pointer (on seven tries), and most importantly, didn't get to the line. Not even once.

Along those lines, the Hornets shot only four freebies all night. Four. That's it. On their court, and two belonged to D.J. Mbenga, marking what has to be the first time D.J. has accounted for half his team's free throws. And while I'm sure New Orleans fans aren't happy about it, give credit to L.A.'s defense. Yes, they struggled to contain Paul and were loose on the perimeter in the middle two quarters (in which they allowed 63 points), but they compensated by not fouling. No cheap points off turnovers, no production at the line.

That's how you can let a team shoot nearly 50 percent while holding them to 95 points and winning by six. Not a recipe I'd recommend, but Friday night it worked.

1. Someone Cover The Aussie. As a member of the Rockets last season, David Andersen came to Staples Center and had arguably his best game as a pro, scoring 19 points and raining jumpers down from all over the floor. Meaning the Lakers should have been familiar with the guy's profile. Or not, apparently. Andersen planted himself on the perimeter against the Lakers, and once again knocked down shot after shot. Some came off good offense, others because the Lakers either didn't respect him enough to make the cover, or just wandered too far to recover. The first will happen from time to time, but the latter two shouldn't. He'd finish with eleven points on five-of-seven from the floor.

So good was Andersen, he was the Subway Sub of the Game on the KCAL broadcast. Good on ya, Dave... bad on ya, Lakers.

2. Perimeter Shooting. That the Hornets spent the third quarter knocking down jumpers like it was shootaround- they were six-for-eight from downtown- the Lakers once again struggled to hit from the perimeter. As a team, they were only six-for-18 from beyond the arc (33 percent). Take away Kobe's four triples on five tries, and the figure drops considerably. Shannon Brown, Steve Blake, and Derek Fisher were a combined one-of-eight from three, continuing a trend of poor production with the jumpshot plaguing the Lakers once the early season's red hot shooting wore off. Gasol and Bynum (12 points, 5-8 from the floor) were efficient enough that in the end it didn't matter, and Bryant did come through with a much-needed triple in the fourth quarter, but overall the Lakers continue to struggle as a team.

It's not exactly a new problem- there was plenty of hand-wringing over this last year, too- but with the addition of Blake and the early season productivity of Brown, the hope was the Lakers had found an answer. They haven't.

3. Pick and Roll Defense. A mess all night. Give credit to Paul, one of the game's true artists in this area, but bad is bad, and they were bad.