Two games, two wins. A nice start to the road trip for the Lakers, without question. Monday's effort wasn't a work of art, but it did the trick, and there are plenty of positives to take from it.

1. Defense, Particularly the Fourth Quarter. Thanks to L.A.'s largess (see below), the Grizzlies entered the fourth with a chance to steal a game the Lakers seemed ready to salt away, but found themselves stonewalled by the champs. Even as the Lakers went over three minutes without scoring, Memphis was only able to shave two points off their lead. After Tony Allen finished with a dunk at the rim to cut a lead for the still-stagnant Lakers to two with 7:01 to play, L.A. clamped down. Hard. Memphis didn't score again for over four minutes, a stretch featuring two steals from Ron Artest, another from Derek Fisher, and a host of strong close outs (or wise "Hey-Tony-Allen-feel-free-to-take-that-open jumper!-outs). Until a pair of totally meaningless Sam Young triples in the final minute of play, the Lakers had held Memphis to 10 points in the frame. 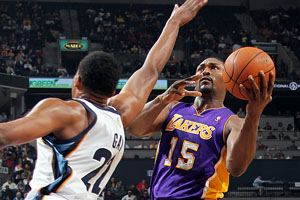 Ron Artest was a major component of a very good defensive effort from the Lakers Monday night. He chipped in at the other end, too.

Combined with a second quarter in which the Lakers limited the Grizzlies to 16 points, the Lakers had two stupendous defensive quarters. In the third, they were betrayed by their offense (see below) but still only surrendered 23 on their end.

All told, the Lakers held a Memphis team coming in with eight wins in 10 games to under 40 percent from the floor, and earned 12 steals.

2. Top of the Third Quarter. For all the hand-wringing over how the Lakers have played this season, there have been plenty of moments where they remind everyone, "Oh yeah, those are the champs." Coming out of the third quarter, L.A. put on that sort of clinic, as they extended a five point lead to 13. It wasn't simply that they ran the lead out, but how. After Rudy Gay started the half with a tough baseline jumper elevating over Ron Artest. From there, ball movement ruled the day for the Lakers. Andrew Bynum with an offensive rebound of a Kobe Bryant jumper at the top of the key, making a slick pass to Pau Gasol cutting through the lane. On the next trip, Gasol returned the favor, taking a nice pass off the double team and making the touch lob to Bynum inside. Artest followed with a nice crosscourt feed to an open Fisher for three. L.A. with great ball movement on the perimeter, freeing Artest for three in the corner. And so on.

Slick stuff, to say the least. Of course, they followed it up with a horrid stretch of play (the type creating concern in the first place, see below) but even though they allowed the Grizzlies back in the game, that sort of run changes the context of a game.

3. Pau Gasol. I'm not going to take credit for another strong game from Gasol, but once again I'm left with no choice. As it was when he lit up New Orleans after I wondered aloud last month if he still deserved an All-Star nod, once again Gasol was motivated by my work-- this time, showing me exactly what I'm losing after my just completed trade sending Pau off my fantasy team for Dirk Nowitzki. (Admittedly, watching Pau clean out his locker will be tough.) 17 points, nine rebounds, and a pair each of assists and blocks, on a tidy six-for-11 shooting line. Had Gasol been able to hit a free throw (five-of-nine), his night would have looked even better.

More importantly, Gasol was aggressive. He sliced through the lane, making himself available with nice weakside cuts. He put the ball on the floor, and worked for position inside. Not to get all wrapped up in the whole black swan thing- I have a feeling the metaphor is going to get tired pretty quickly- but for the third straight game since Kobe's little pep talk Pau called his own number when it was there. By the eye test, at least, he looks much more like the championship edition than the one struggling through the middle portion of the season.

Plus, he helped hold Zach Randolph- the current Western Conference Player of the Month- to two-of-14 from the floor, and eight points.

4. Ron Artest. His shooting line (seven misses in 11 tries) belies an aggressive game offensively, and misses a couple big triples Artest nailed over the course of the game, but as it is with Ron when his game is on, his impact was felt strongest on the other end. Four steals, hands everywhere, and good work on Rudy Gay, helping hold him to a relatively quiet 18 points (many coming on tough jumpers nobody can guard), and importantly only four trips to the line.

1. Third Quarter Turnovers. When the Grizzlies torched the Lakers by 19 at Staples, it was turnovers fueling their attack. In the first half Monday, one reason they finished with a five point lead was a very manageable five giveaways. This against the team leading the league in turnovers forced. In the third, though, L.A. grew a little too generous, and as a result all the good work from the top of the quarter went by the wayside. Had the Grizzlies been a little more opportunistic- they managed to turn the generosity into only six points- the Lakers may not have escaped the third with a five point lead.

In the fourth, it didn't get much better. Kobe had three more himself in the first four minutes-plus, and Fish added another for good measure. Suddenly the Grizzlies were pushing 20 points off turnovers, and the Lakers were in a dogfight.

2. Offensive patience. In the third and fourth quarter, perhaps fueled by turnovers and the raggedy offensive flow they created, the Lakers simply stopped moving the ball. In the third, Gasol and Bynum, both effective early, combined for four shots. As a team, they they launched too many jumpers and early clock shots against a team struggling to handle the Lakers when they moved themselves and the ball. While the elegance displayed at the top of the third never returned, the Lakers did manage to find a little more rhythm ... or at the very least, hit a couple more shots.

Sometimes a team gets out of sync. It happens. But it's a shame when the wounds are relatively self-inflicted.

3. Free Throws. As a team, the Lakers were a very poor 21-for-35 (60 percent). Take away Kobe's seven makes in seven tries, and it drops to 14-for-28. That's awful. Pull ten fans from the crowd, and I doubt they'd have done worse. In a road game against a competitive team, the Lakers did themselves no favors by leaving so many points on the table. It could have come back to bite them, no question.

4. Backup Backcourt. Shannon Brown hit a three to start his night, and then another jumper. From there, missed. Meanwhile, he picked up four fouls in about 15 minutes of burn, and turned the ball over twice. Steve Blake made his only shot- a fourth quarter triple- but the problem is he only took the one. Eight points from L.A.'s reserve guards puts a serious burden on the starters. Tonight, thanks to good work from Fisher (four-for-seven, 10 points, four assists, and countless good defensive plays) and the aforementioned solid D, it all worked out, but overall getting so little production from the reserves isn't a great blueprint for success.