76 down, six to go: How long can you hold your breath?
10yBrian Kamenetzky
Pelinka expecting fully vaxxed Lakers by opener
2dDave McMenamin
Debating LeBron's spot and the biggest surprises of NBArank 2021
2dNBA Insiders
NBArank 2021: Where the final five check in, including LeBron, Giannis and KD
2d
Who's No. 1? The cases for LeBron, Giannis and every star remaining on the NBArank countdown
3d
The evolution of NBArank: Lessons from a decade of ranking the league's best
6dKevin Pelton
Dennis Schroder pokes fun at how he 'fumbled the bag'
10dBrianna Williams
NBA predictions: Does Team Turmoil reside in Philadelphia or L.A. this season?
9d
How Carmelo Anthony almost traded hoops for homers
11dJames Jackson
Our experts' picks for MVP and Finals winners
10d
Sources: Grizz to get, cut Gasol after Lakers deal
15dAdrian Wojnarowski
Lakers' DAJ: KD, Kyrie 'bros. beyond basketball'
16dDave McMenamin
NBA predictions: Why our West forecast has the Lakers and Clippers headed in opposite directions
11dNBA Insiders
Apr 5, 2011 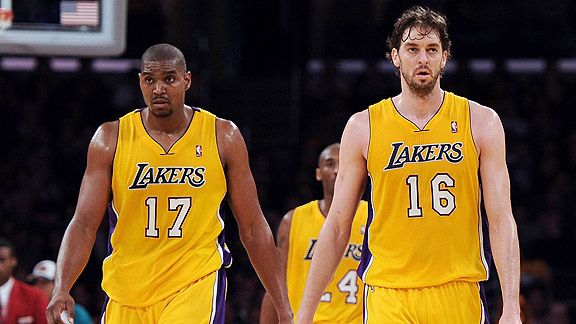 Scary moments for Pau Gasol and Andrew Bynum in Sunday's game have prompted questions as to how hard the Lakers should push over the final six games of the regular season.

Sunday's loss to the Nuggets wasn't scary based on the final score -- file those who are worried about the team's second loss in 19 games since the All-Star break under paranoid -- but because of a pair of second half plays that flashed the town's threepeat dreams before their purple and gold eyes.

In the third quarter, Pau Gasol went down hard after absorbing a foul, wrenching his right knee in the process. He stayed in the game following a timeout, but after a couple clearly painful trips up and down the floor was removed and bee-lined to the locker room. Gasol finished the game, but acknowledged discomfort after. Andrew Bynum missed the final 7:15 of the game after Lamar Odom fell into his right knee.

Lakers fans have seen versions of this movie, and did not approve.

Fortunately, neither incident appears serious. Bynum said Monday he could have returned to Sunday's game, was a limited participant in practice, and expects to play Tuesday against the Jazz. After an MRI, Gasol was diagnosed with a bone bruise and is considered day-to-day. It's certainly possible he could miss a game or two, but on its face the injury doesn't appear to be serious. Or at the very least, a whole lot less serious than it could have been.

Still, both plays reinforce the fragility of title runs, particularly once April rolls around.

An advancing calendar generally favors teams like the Lakers, conditioned to perform in the playoffs and often unmotivated by the regular season. Generally. Regarding injuries, the Lakers are like every other team with championship aspirations, pushing to the playoffs and playing important games while all the while understanding one injury to the wrong guy could effectively render a season worth of work moot.

'There's not a whole lot of time between an injury and the beginning of the playoffs where players can get back and healthy and come back and return," Phil Jackson said Monday.

Sunday's events rekindled age-old questions about how hard a veteran team like L.A. should push down the stretch. On the one hand, the Lakers still have a great deal to play for. While the loss to Denver made the path tougher, the Lakers nonetheless have a chance to catch both San Antonio and Chicago above them, and must mind hard-charging Miami behind. They're not yet locked into any given slot.

On the other, a higher seed doesn't mean much unless the roster is intact, particularly for the Lakers, who have shown the ability to win on the road.

What to do, then?

Tempting as it may be to play it safe and shut guys down early to rest for the postseason, until the Lakers can neither gain the advantage of working higher on the playoff ladder nor lose it by dropping down, they have to play. Fear of potential injuries shouldn't outweigh opportunities to win any game that matters among the final six. Common sense should rule -- if either Gasol or Bynum risks further injury by playing, they should sit until the danger passes -- and Jackson ought to have a quicker hook for starters once games are salted away (i.e. no more playing Gasol with two minutes remaining and the Lakers up by 14).

Even accepting L.A.'s strong track record in big road games over the two previous postseasons, it's still not as significant as their dominance at home or the edge gained taking home court advantage away from teams like Chicago and Miami in a potential Finals matchup.

Not to be overly fatalistic, but short of enveloping players in bubble wrap and taking the aforementioned common sense precautions, not much can be done to prevent injuries. The basketball gods have been good to the Lakers over the last few seasons, and the champs can't do much more than hope they don't change their minds.