Heading into the opening round of the Western Conference playoffs, nobody gave the New Orleans Hornets even a puncher's chance in a series against the Lakers.

Apparently, the Hornets didn't get the memo.

In Game 1 Sunday at Staples, Monty Williams and crew did a number on the two-time defending champs, playing stiff defense for most of the game while slicing and dicing the Los Angeles Lakers with an endless series of pick and rolls. In the end, they earned themselves a fairly stunning upset.

I thought the Hornets would win a game in the series, but not Game 1.

"It is dangerous," Kobe Bryant said of losing the opener. "Absolutely. A series can be over quick." Particularly given how the Lakers performed down the stretch.

1. Ball Movement. Like everyone else in creation, the Hornets entered Sunday's game aware of the size advantage held by the Lakers in the block. It's no coincidence Andrew Bynum shot about 65 percent against them in the regular season, while Pau Gasol shot better than 70. So, not unexpectedly, the Hornets started virtually every trip with an extra defender shading toward whichever big man L.A. had on the low block at any given time. 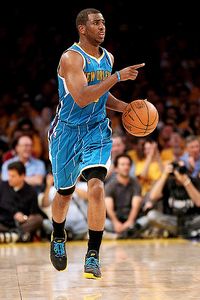 "Hey you, in the front row! Watch me as I destroy the Lakers in Game 1!"

It's not anything the Lakers haven't seen before, and they could have found better looks. But particularly in the first half, too many possessions ended with one, maybe two passes, and then the type of mid-range jumper likely available to them later in a trip, if they wanted it. The Lakers did very little to punish the Hornets for overplaying the post. Didn't make them move, help or recover. It explains, in part the relatively low first-half shooting percentage (42 percent) and the anemic output of Gasol and Bynum in the first half (combined three field goals, including only three attempts in the first quarter).

As a team, the Lakers lost the points in the paint battle over the first 24 minutes by 12, and for the game by 18. Defensive breakdowns leading to penetration contributed to New Orleans' output- it's not like Emeka Okafor dazzled the crowd with post moves- but for the Lakers a total inability to use their length inside was the limiting factor.

Even when the Lakers managed to put points on the board, it was a grind. In the third, they managed to turn aggressive defense into opportunities the other way, but the fourth wasn't a picture of elegance, and overall the Lakers never worked their way into any sort of flow. Credit New Orleans, no question. The Hornets were an ordinary offensive team this season, but by any metric locked down well at the other end. Still, the Lakers didn't suddenly get bottled up Sunday. Their problems were the same down the stretch of the regular season against lesser defensive teams such as Sacramento, Utah and Golden State.

2. Defense, Save the Third Quarter. Early on, the Lakers surrendered the types of shots you can live with. A long jumper from Trevor Ariza, midrange plays from Carl Landry and Marco Belinelli. That sort of thing. But as the game went along, particularly in the second quarter, the Hornets were offered extremely high-percentage looks, thanks in large part to the efforts of Paul, who consistently broke down the Lakers off the dribble, particularly on the pick and roll. In one second-quarter sequence, New Orleans scored on a dunk inside from Emeka Okafor, earned free throws after Aaron Gray was fouled trying to finish at the rim, a dunk from Landry, a layup in transition from Jarrett Jack following a Bryant turnover, and another layup from Gray off a dish from Paul.

That's eight points in about three minutes, all from no more than two feet out, and it would have been worse had Gray hit his freebies.

One common strategy when playing a dynamic point guard like Paul is to turn him into either a scorer or a distributor. One or the other, but not both. Fair to say the Lakers failed in that regard against CP3, who entered halftime with 11 points and 10 dimes, and finished with 31 points, 14 assists, seven boards and four steals. But it wasn't just Paul who hurt them. Jack was nearly as effective off the screen/roll sets, racking up five assists in 21 minutes of burn to go with 15 points. Something feels tolerable about Paul penetrating and finishing with a slick pass to Landry on the post. I suspect fans aren't quite so charitable when the combo is Jack and Gray.

The Hornets finished the first half by shooting nearly 60 percent, and after the Lakers locked down in the third, came back strong again to start the fourth, breaking down the defense with an endless series of pick and rolls, piling two or three up on each trip. Paul, it should be noted, was absurdly effective down the stretch.

3. Pau Gasol. As noted, the Lakers did a poor job moving the ball to get him touches down low, but Gasol didn't help himself, either. The looks he got, he missed, whether on the block or facing up along the perimeter. One field goal through the first 47 minutes of action isn't enough. And the second one, coming late with the game already decided, didn't exactly make up for it.

Bad, bad start to the playoffs for L.A.'s front-court All-Star.

"I was just not very sharp," Gasol said. "I couldn't get into a good rhythm in the first quarter. i didn't get myself going at all, so it's up to me to get some energy out there and be a little more aggressive, and find ways to find that rhythm."

Bryant, speaking both to encourage and challenge, said Gasol is obviously capable of more. "Pau is our guy. He's our guy, he's the next in line. Responsibility and pressure comes along with that. He'll be ready to go next game."

4. Lamar Odom. There are games where Odom doesn't score much, but still has an impact, whether on the glass or in the flow of the offense. Sunday was not one of them. More than 31 minutes, Odom registered only 10 points, most of the garbage variety, and was a complete non-factor in the rebounding department, failing to grab one in the first half, and finishing with only one. He was part of a Lakers bench that, save a third-quarter burst from Shannon Brown, was totally ineffective. 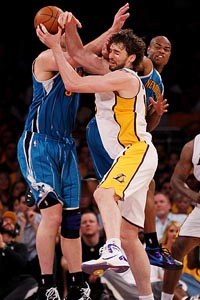 Sunday was a bad day to be Pau Gasol.

Keep in mind, it's all relative.

1. Kobe Bryant. The five turnovers weren't great, but on a day where the Lakers' offense essentially boiled down to whether or not Kobe could make enough plays to get them over the top, he certainly put forth the college try: 34 points on 13-26 from the floor, plus eight trips to the line. He added five assists, as well.

In terms of raw numbers, it's hard to argue with Bryant's production from the floor, particularly when nothing else was working for the Lakers over the course of the day. But if L.A. expects to start piling up wins -- and they do -- over the course of this series and the postseason generally, they can't have many games where Kobe takes 26 shots and nobody else reaches double digits. Moreover, they need to get Bryant more looks working off the ball, because when the Lakers did, the offense was far more effective.

There wasn't nearly enough distribution and balance in the Lakers' offense, and allowing a rock solid defensive team like New Orleans to focus in on Bryant isn't a good idea.

2. Rebounding. Given their problems executing on both sides of the floor, the inopportune turnovers and more, figuring out how the Lakers managed to keep things close requires a little digging. One place to start: the glass. The Lakers dominated the boards, out-rebounding New Orleans 41-33. They were particularly effective on their own end, allowing the Hornets only four offensive boards, explaining only four second-chance points for the Hornets through three quarters, and six overall. New Orleans was essentially a one-and-done team for the day. The problem for the Lakers was they generally only required the one to get it done.

3. Ron Artest. Again, like everyone else he was part of their defensive problems, but you certainly can't fault the effort of Artest, particularly on the offensive side. He spent most of the game working that arm-bar-to-offensive-rebound play he enjoys so much, leading to five ORBs, more than half of L.A.'s total on the day.

Add a nice corner 3-pointer in the fourth helping keep the Lakers tight, and it was a solid afternoon for Artest.