"The Los Angeles Lakers' search for Phil Jackson's replacement is just beginning, but NBA coaching sources on Thursday described the Lakers as "very interested" in Rick Adelman as a candidate for the position. Lakers assistant coach Brian Shaw has the public endorsement of Kobe Bryant and is regarded as by far the strongest in-house candidate for the position. Yet sources say Lakers officials are intrigued by the Adelman option, not only because of his history of success in Portland, Sacramento and Houston but also his reputation for thriving with veteran teams and the similarities between Adelman's 'corner' offense and Jackson's 'triangle' offense."

Also on the early list of candidates, Stein and McMenamin report, are Mike Dunleavy, who began his coaching career with the Lakers, and Jeff Van Gundy. As for Adelman, nothing about the report is at all surprising. I noted when the Rockets fired Adelman last month he'd instantly become an intriguing candidate to succeed Jackson. And while I still think Shaw is the leading contender, the way the Lakers went out only decreases his odds. Had they advanced to a fourth straight Finals, it would have been harder to break up the band. 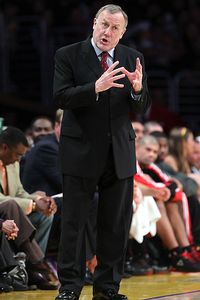 Rick Adelman's name is reportedly high on the list of replacements for Phil Jackson.

At his exit interview Wednesday, Kobe Bryant pointed to "familiarity" as one of Shaw's great attributes. He knows their personalities as players, and how they like to be coached, Bryant said. At this point, though, familiarity and comfort may work against Shaw, not for him. Management might decide it best to make the players a little more uncomfortable. Getting dusted in the second round adds credence to the theory the Lakers need an entirely new voice, and while by definition no voice is like Jackson's, Shaw's still comes from the same tree.

Dunleavy, says Mark Heisler of the LA Times, is well thought of in the Lakers' front office and has had a successful career on the bench, but I tend to think his stint with the Clippers creates a P.R. problem for the team. I don't know if fans would accept the choice. Van Gundy feels like a long shot.

The real wrinkle here is the possibility of a lockout. A long layoff and short regular season favors veteran teams with continuity, obviously favoring Shaw (and, along with it, keeping the core of the team intact), who keeps the existing system and won't require a learning curve with the players. The Lakers don't have a large window with Kobe, and can't afford to give away a year rebuilding, whether with wildly different personnel or a big change in system in a compressed season. Mitch Kupchak wouldn't -- couldn't -- speak to how the labor issues impact the coaching search, but did say the team will be in no hurry to name the next coach.

Whatever the end result, I suspect it'll take a while to get there.