2010-11 Lakers report cards: Matt Barnes
11yAndy Kamenetzky
James has 33, Lakers beat Nets 106-96 in Davis' return
4h
AD returns from 17-game absence in Lakers win
9h
'There is no Plan B': The Lakers are stuck inside their own grand experiment
Los Angeles Lakers
20hRamona Shelburne
LeBron: In 'one of the best zones offensively'
2dDave McMenamin
Heat waste most of big lead, hold on to top Lakers 113-107
2d
May 15, 2011

We continue our series of Lakers' report cards. Next up, the reserve forwards of note (which means no report cards for the sparingly used Derrick Caracter, Devin Ebanks, Joe Smith and Luke Walton). 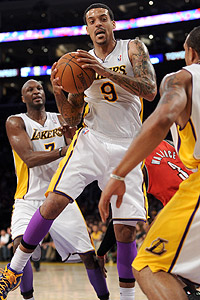 Before getting injured, Barnes was always in the middle of the action.

Matt Barnes was, for me, a prototypical case of expectations turned on their head. Before this season, memories that stood out included Barnes operating like a lunatic during the Golden State Warriors' upset of the No. 1 seed Dallas Mavericks in 2007. Or his ball fake at Kobe Bryant's face last season -- a hilarious, ridiculous bit of bravado. Or this "screen" set on Rafer Alston. Factor in how a player of his caliber had been unable to stick anywhere, and my perception of Barnes the person wasn't too favorable.

As it turns out, that was just Barnes' fire on the court. Away from the hardwood, the guy is almost jarringly soft spoken.

Similarly, I never realized the scope of Barnes' skill set until watching him on a regular basis. From the outset, I thought his ability to move without the ball and hit the offensive glass would fit well into the Lakers' system. But perhaps because he's always been labeled an "energy player," I figured his contributions would be more "hustle" oriented than anything tangible. Barnes revealed far more ability as a ball handler and play-maker than I ever would have guessed.

With all that in mind, it's only fitting he'd end up the biggest surprise of the season.

Before his knee injury, Barnes was having one of the best seasons of his career, possibly the team's most consistent reserve during the period when Lamar Odom was a starter filling in for Andrew Bynum. His November was particularly strong: 9.2. points on 50.5 percent shooting from the field, 40.5 percent success from 3-point range, 5.1 rebounds -- with nearly two a night on the offensive glass -- and 2.2 assists. Barnes' admitted lack of triangular knowledge was offset by his perpetual motion, which consistently placed him in the right place at the right time.

If anything, the biggest negative about Barnes during November and December was the way he inadvertently messed with Ron Artest's head. These strong performances coincided with a rudderless slump for Artest, often resulting in Barnes getting the crunch-time, fourth-quarter minutes. This development seemed to plunge Artest further into a basketball abyss.