In broad terms, Derek Fisher was largely the player this season he was the season before. In one important respect -- 3-point shooting -- Fisher was actually better, boosting his percentage from 34.8 to 39.6 percent, while shooting 39 percent from the floor, overall. While neither number is exactly slathered with "wow" factor, the figure from downtown actually exceeds, and the mark from the floor matches, Fisher's career norms.

Basically, they reinforce an important reality: Fisher has never, on a night-in, night-out basis, been a particularly good or consistent shooter. 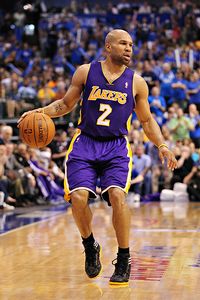 Derek Fisher was, more or less, Derek Fisher this season for the Lakers ... which was a problem at times.

It also emphasizes how complaints about Fisher's age and general lack of NBA-caliber quickness miss the point: While Fisher's D garners most of the attention, he hurts the Lakers more offensively than at the other end. It was true during the 2009-10 season, and it was true again this season, one in which Fisher ranked 55th out of 65 point guards in effective field goal percentage (48.6) and 60th of 65 in player efficiency rating (8.94). Off the dribble, Fisher remained among the worst at his position in finishing at the rim (49.3 percent), despite a jump over the stats from his past two seasons (38.0, 39.5).

To be fair, L.A.'s system doesn't ask him to bust out more traditional point guard skills (though his assist rate was up this season against a reduced turnover figures) nor does the personnel with whom he plays leave much on the table for him (nowhere in his "who eats first" monologues does Kobe Bryant mention Fisher's name). His usage rate this season (12.8 percent) set a career low. As a spot-up catch-and-shooter from beyond the arc, he was a reasonably efficient contributor, though as a percentage of his overall shots he didn't take enough of them.

Nor do stats accurately measure Fisher's key role in managing the offense, organizing the proceedings, making the proper reads to trigger the offense, and so on. Cliche as it is, there are indeed things Fisher did for the team that stats don't measure.

Unfortunately, as noted above, for those areas that the stats do, in fact, measure, the good doesn't outweigh the bad. The intangibles don't cancel out the tangibles. In the first two seasons of his Lakers 2.0 Tour, Fisher blasted through his career averages, shooting the ball extremely well and goosing the team's overall offensive numbers. Now his performance, particularly when combined with other factors -- including the inconsistencies of Ron Artest, inconsistent bench production and the change in Bryant's ability to generate easy points -- makes Fisher a drag on L.A.'s ability to score.

At the other end, the narrative of Fisher-as-defense-killer is overstated.

Without question, Fisher can't keep up with fast point guards. They hurt him in the open floor and in isolation sets, burdening the guys behind him. This, though, is true of most every point guard in the league. In a pick-and-roll league, defensive responsibilities are spread around among all five guys on the floor. When the Lakers responded as a unit, the numbers are good. When they didn't, they weren't. Fisher, built like a small tank, fights through screens better than most, takes charges, funnels the opposition in the proper direction, and was probably the team's best defender in transition, thanks to excellent instincts and positioning skills.

While he'd too often sag off his man either to help on a big in the post or run a sort of turnover-hunting sneak attack, Fisher was also good at dropping to the level of the play to get a hand on a ball. That (plus the fact he rarely played with the bench) explains at least in part why Fisher's on/off stats were among the strongest on the team.

In short, Fisher showed other strengths mitigating obvious shortcomings as a one-on-one defender. The Lakers, when they put in the effort and attention, were a good defensive group, and despite all the handwringing were actually among the more effective teams in the league guarding the pick and roll during the regular season. In the first round against Chris Paul and the Hornets, Fish produced some of the team's better numbers against CP3. He's not a lockdown defender by any stretch and certainly is worthy of criticism, but bottom line, most of the anger directed his way is misplaced -- too much at his defense, not enough towards his O.

From a durability standpoint, Fisher was once again a rock, playing all 82 games, just as he has in each of the past four seasons with L.A., and eight of his past nine. His minutes actually increased from 27.2 in 2009-10 to 28 this season. Not exactly a monster increase, but also the opposite direction the Lakers were trying to go with his playing time. The addition of Steve Blake was designed in part to lighten Fisher's load, at least during the regular season, helping add another layer of production at the point in the process. It didn't work. At 22-25 minutes a night, Fisher's shortcomings aren't as significant.

Fisher was this season basically what he was the season before. Same basic strengths, same weaknesses. Unfortunately, the team around him has grown increasingly less able to utilize the former, or paper over the latter.