After the Lakers' unceremonious exit from the playoffs, I noticed a common cry in our blog's comments section, mail bag, and chats: Kobe Bryant proved once and for all he's "not Michael Jordan and he never will be." It's not even a matter of Jordan's rings and records, both of which Kobe could eventually match or best. The Mavs waxed the Lakers, the straw that broke the camel's back -- along with Kobe's resume -- for many in evaluating "contender vs. pretender."

Kobe has two losses in the Finals vs. Jordan's undefeated clip. Bryant's teams were eliminated by a margin of 28 (2003 semifinals vs. San Antonio), 31 (2006 quarterfinals against the Suns in a Game 7 where Kobe supposedly "quit") and 39 (2008 Finals against Boston) and now 26 in these recent playoffs. Failure to reach the second round of the 2006 playoffs after going up 3-1. MJ's superior collection of individual awards. The Three-peat teams "belonged to" Shaquille O'Neal. (And for those truly obsessed with keeping score, the '97 air balls, the radio tour, "running Shaq and Phil out of town," etc.) 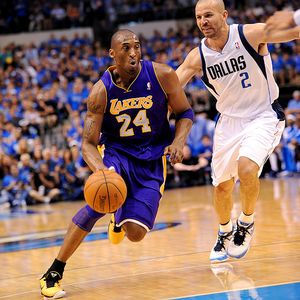 If there's a silver lining to the Lakers' collapse against Dallas, it's the potential liberation for Kobe from the "you know who" comparisons.

Getting swept by Dallas was the icing on the naysayer cake. There's just too much failure now staining Kobe's career to put him in the same class as Jordan. Thus, it's over. Let us never mention Kobe in the same breath again.

Better late than never to reach this pact.

This reaction, by the way, shouldn't be interpreted as agreement. Honestly, I've given this never-ending debate very little thought, and don't imagine that changing anytime soon. Personally, I find the "Jordan vs. Kobe" regurgitation as a matter of course beyond cliched at this point. As I said after last season's title, the fervent denial of his own identity often astonishes me. Bryant has embarked on one of the most fascinating -- much less successful -- careers in recent sports history, and yet it's barely viewed through any prism other "MJ." Even if you think Kobe falls short of Jordan by every quantifiable measure known to mankind, his accomplishments are strong enough to be the primary factor shaping his legacy.

Plus, it's not even a fair fight. For so many basketball fans, nobody will ever pass Jordan. Period. Point blank. End of story. Again, the validity of this opinion isn't the issue, but if Bryant can't win in the first place, stop pushing him into the ring. After these playoffs, perhaps the knee-jerk comparisons may lessen, which should make a lot of people happy (not the least of which, Kobe himself).

Fingers crossed, after 15 seasons we may actually be embarking on a time in Kobe's career where, for better or worse, he's seen as himself.

However, this isn't the only potential transformation in the making for Kobe. And since old habits die hard even for those not in need of breaking them, there's still one way where he can get a leg up on MJ, regardless of how many more rings do or don't come:

The ability to age gracefully, in perfect fashion and with clear purpose.

This is Chris Rock's explanation of why every single man must eventually stop hanging out at The Roxbury. At some point, people will question why you're even there. While the context is obviously different, the point made reminds me of how I've always felt about Jordan's two seasons with the Wizards. It's not that MJ couldn't still play at a shade under 40 years old. His numbers and All-Star bids proved otherwise. But even for the greatest and most iconic athlete, there needs to be a purpose to competing, and I never felt like I understood why a man of Jordan's stature was out there. 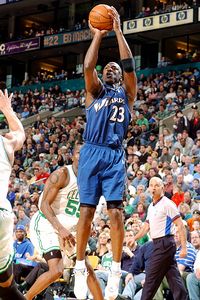 Not the most inspiring time in MJ's career.

What struck me most about his time in D.C. was the way it felt so pointless. The Wizards missed the playoffs in both seasons, so MJ didn't make them competitive enough to be worth of his time. Instead, we just remember Jordan pushing Richard Hamilton out the door. His inability to mold Kwame Brown, his hand-selected lump of clay. An anticlimactic true goodbye. MJ didn't embarrass himself, but his Washington stint seemed like an overstayed welcome. Particularly when he could have gone out on a perfect note, with a sixth title and a right hand stretched over Byron Russell (even if he did push off).

Like MJ, Kobe also isn't too old to get it done. By definition, those placing fourth in MVP voting are pretty good. He remains an elite player. Nonetheless, there's also no question Kobe is entering a stage of relative decline. The injuries, nagging or more severe, are piling up. Mostly observing practices this season. He's no longer the same bet to successfully take over a game in the fourth quarter and will the Lakers to victory.

Acknowledging this doesn't marginalize Kobe. The guy has played 15 seasons (1103 games), plus another 208 playoffs games, nearly the length of an additional two and a half regular seasons. Maybe Kobe will be correct about a long summer doing his body exceptionally well. But for now, I'm skeptical he can stay consistently healthy after accumulating so much mileage. Either way, nobody in their right mind would expect the equivalent of an 18 year veteran to play Superman -- or Batman, Kobe's preferred hero -- at will.

Hopefully, Kobe is among the levelheaded.

Recent days have featured vaguely unsettling comments about the upcoming time in his career. His assessment that Game 3 against Dallas fell short because "the last five minutes are when I go to work," and he didn't get the job done.

The way he deemed Andrew Bynum's desire for an increased offensive presence a nonstarter issue with a rephrase of his "eating" protocol. "Ultimately, he’ll have to fall in line because I’m gonna shoot the ball," explained Bryant. "We all know that. Pau [Gasol] is going to get his touches. So he’s number two in command. And then [Andrew] will have to fall in line with that. It's pretty simple.”

The way he made a point of noting the goal of "shutting up those MF's saying I'm done."

Kobe's also right, by the way. He's not done, and those saying otherwise should in fact shut up. For that matter, every athlete on the planet uses doubters as a less expensive form of gasoline.

But at the same time, a season can't be used to prove a point. It also can't get bogged down in rigidity. As unquestionably and insanely driven as Kobe is to win, the knock has always been it's equally important to win his way. As the alpha male. The Black Mamba. The NBA's ultimate assassin. There has been a recent air of inflexibility giving the skeptics and even supporters pause.

Is Kobe so insanely competitive, he'll pick an unnecessary fight with Father Time, perhaps derailing the chance to maximize a team built around him?

Hopefully, this is a matter of me harping too much on semantics, and Kobe's actions will emerge less dogged than his words. But like Jordan in D.C., there is a little part of me fearing a lack of clarity to this impending stage. That Bryant's persona will be clung to so tightly, it will be all he's left with after whatever potential riches slip through his fingers. That this will mark the start of a transition more cringe-worthy than awe-inspiring, unworthy of a player of Kobe's accomplishments.

That in his own way, he becomes the old guy in the club.