We begin today with the first in a series of conversations in which we ask various NBA players past and present who grew up in L.A. to share how specific elements of their game were honed in this city.

For Raptors guard and Compton native DeMar DeRozan, the “L.A. in my game” is "toughness."

"Playing against the older kids, always being pushed around, I learned how to be tough, how to play hard, "explains DeRozan. 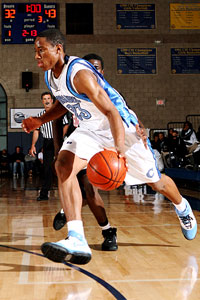 Andy Kamenetzky: When did you first feel like that toughness was put to a test?

DeMar DeRozan: When I was probably about 11 or 12 I was playing against my dad. Just going against him and I never could beat him. When I got to a certain age when I felt strong enough and beating him and playing tough with him, he definitely felt it.

AK: Where did you typically play?

DD: Parks. We grew up in parks that was in Compton. Gonzalez Park, a lot. Compton High School, the high school I went to. A little bit of everywhere. It just wasn't always in one place.

AK: When you and your dad were out there, did other older kids join in?

DD: All the time. I always played two-on-two, three-on-three, against the older guys. Learning from them.

AK: Do you remember a particular time while developing toughness where you got really knocked on your butt?

DD: Yeah, when I got my mouth busted going up trying to dunk on somebody at a young age. Just being smaller than him and they wasn't going for it. That was my real first test at realizing that I'm not as big as them. But I was willing to play hard against somebody and never gave up.

AK: How did you react immediately afterward?

DD: I just got back up, kept playing and kept going. I didn't want to stop. I wanted to show them that I had heart and I wasn't gonna stop.

AK: How much in your head were you thinking, "Damn, this hurts!"

DD: The whole game, until I got home. (laughs) I cried to myself about the situation. But I never showed it to nobody else.

AK: How long did it take after you walked into your house before the tears starting coming out?

DD: As soon as I walked in. I knew nobody else was around. I had to keep it in throughout the game.

AK: Do you remember the first time you actually realized, "I have some toughness?"

DD: I think as I got older, I started seeing it. When I was young playing basketball, I had kind of an attitude problem. I'd knock a player before they knocked me down. I think that's where my whole tough mindset came from. Just go out there and play hard.

AK: But in mentioning that attitude problem, that toughness could have gotten out of hand if you didn't know how to control it?

DD: Oh, yeah, yeah. It could have. But as soon as I got older, matured, and understood how to use it, then it benefited for me and my game.

AK: Do you remember any particularly tough kids you played against? Guys you knew would always play very physical against you?

DD: I'll tell you, it was everybody, because out of everybody I used to hang out with, I was the youngest. Even my cousins, playing against them, I was always the youngest. Everybody was bigger than me than when I was young. And then as time went on, I began to grow and get stronger, I started becoming the bully.

AK: Do you remember the first time you knocked someone else down and carried on the tradition?

DD: I was about 15 or 16. I dunked on my cousin and told him this is my house. And made my point from there.

AK: Is that toughness something that comes from playing in L.A. and Compton?

DD: Yeah, because no matter if a player is not that talented, he's gonna have that toughness. He's not gonna let nobody get nothing easy. He'll play you physical. So that's one thing that thing that definitely comes from playing in Compton and L.A. in general.

DD: Everybody's style is different, especially from where they grew up. I think it's always been a knock on east coast and west coast players' games being different. It's always different. Everybody's got their own toughness. And I have to say, our (L.A.'s) toughness is definitely unique.

AK: How do you think it's different than, say, "New York" toughness? People always talk about places like Rucker Park and The Cage as very tough.

DD: Rucker and The Cage are definitely a tough place to play. I've played in Rucker. It's very tough. But I think back home, everybody takes it personally. I don't know. There's something about it. Everybody in L.A. has got an ego about something when you step on that basketball court.

AK: How thankful are you now for having that experience growing up?

DD: I'm definitely thankful, because I have to credit my talent to where I grew up and the environment I grew up in, because that made me the type of player that I am today.