When the Sacramento Kings appeared destined to become the Anaheim Royals, the Lakers objected to the move. Still, beyond some real economic considerations related to the team's TV upcoming TV deal with Time Warner, even with a third team in the L.A./Orange County market (separate in many ways, but sharing TV and radio imprints), it was reasonable to ask how much the presence of the Kings would actually damage the Lakers brand. 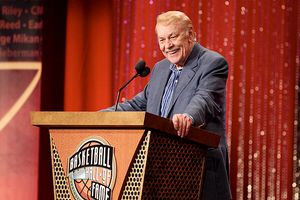 In a new CBA, the power of Dr. Buss' checkbook is almost certainly going to be diminished.

Maybe a lot, probably not much at all. One thing, though, was absolutely beyond debate: Save the difference in cost between a bus ride to Honda Center and a few flights a year to Sacramento, there was no upside.

Now the NBA officially is in lockout mode. We're a long way from gaining any kind of picture of how long it will last, and because the two sides are unlikely to meet for a while-- a little distance is probably a good thing-- are likely to remain in this purgatorial state for the time being. When everyone finally gets back to the negotiating table, players and the union remain miles apart on key issues, so what the new CBA looks like when finally hashed out is obviously a wide open question. But just as it was with the Kings and Anaheim, as it relates to questions of competitive advantage for the Lakers under a new agreement, one thing is pretty clear:

There's not much upside.

Once moving past the obligatory-but-legitimate position a healthy league is healthy for the Lakers-- L.A. can't do what it does without other teams on the schedule-- the new rules aren't likely to contain much, if anything, benefiting them. Whether talking about increased revenue sharing or some mechanism placing a hard top-end to team payrolls, these are constructions designed to add parity, limiting the ability of teams like the Lakers to wield their Thor-esque hammer of cash currently toted around.

The Lakers finished the season with the highest payroll in the league, and by extension paid more luxury tax than their brethren. About $112 million in all devoted to player salaries, give or take. Plus the heavy chunk of change handed over to Phil Jackson... and they still make money. They win because they're rich and exceedingly well run, but the money part definitely helps, not simply because it allows them to get very good players, but more importantly keep more of them for longer than other teams. A hard cap, whether at $60 million, $90 million, or some other number, by definition limits their ability to dominate by checkbook.

Hard caps also mean the Lakers likely will have to trim payroll over whatever designated period of time, no easy spot to be in, particularly in a city used to enjoying big time hardwood stars (usually more than one at a time). Whether through adjustments in player contracts, amnesty provisions, or other mechanisms, obviously the more time granted to hit the required number the better, but in any system it will be a tricky challenge for high-salaried teams like L.A.

This brings them back to the field, as does revenue sharing. The NBA's revenue sharing program isn't nearly as strong as in the NFL or MLB, and while the owners have to figure out the particulars, there will almost certainly be more going forward. Every dollar the Lakers share is one other teams can (and should be made to) use to improve themselves.

None of this is to say these changes aren't good for the league or shouldn't happen. Nor will the Lakers ever become exactly like, say, Indiana. They will always have advantages. Cache, geography, weather, and the sort of supplementary opportunities the city provides, just to name a few. Assuming some system is in place in which there is a range for player payroll, the Lakers will almost certainly hit the salary ceiling in most seasons, or at least be willing to if the right players are available. Some teams will stick near the floor.

Assuming they are run with the same level of competence to which we've all grown accustomed, the new CBA and revenue sharing rules won't mean the demise of the team. The downside has limits.