Heading into the weekend, former Lakers shooting guard Sasha Vujacic, a free agent at the end of the 2011 season, signed a deal to play in Turkey. There appears to be some question as to whether or not the deal includes an out clause allowing Vujacic a return to the NBA when the lockout ends, but there's certainly a chance it doesn't, particularly since the contract contains an option for a second season. 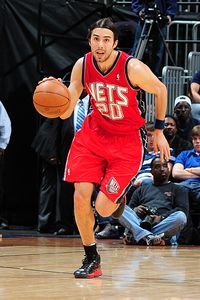 Should that be the case, it would be bad news for the Lakers. Not because they lost out on a guy they badly want -- despite needing a shooter, I doubt seriously the Lakers would bring Vujacic back, though you might be surprised how many notes we get hoping they would (apparently absence makes the heart, if not grow fonder, at the very least forget all the things that used to tick it off) -- but because of what it might represent. No matter how the new CBA is constructed, the Lakers will have limited flexibility financially to address a variety of needs.

In the backcourt, and particularly at the point, the free-agent pool is thin. Losing players like Vujacic, in the tier of of player the Lakers can likely afford, only further weakens the class, driving up demand/price on a smaller pool of remaining options.

Speaking Sunday to a free agent with NBA experience but a long track record playing overseas and no guarantee of a roster spot in the Association, he said the temptation to jump on an offer in Europe or Asia and lock in a paycheck is strong. Out clauses are ideal, but can't always be had, and for many players business considerations could at some point trump the preference to stay stateside.

For all the talk of big name players following the Deron Williams model, assuming no Lakers join him, there's no practical impact for L.A.'s 2011-12 roster. (Unless someone backs the EuroBrinks truck up to Kobe Bryant's front door with an offer substantive enough to offset the costs of the insurance required to protect the $85 million or so remaining on his contract, I don't think he'll go.) But if more lower-level, lower-income players fear a potentially protracted work stoppage and accept deals overseas sans out clauses, it'll squeeze the less glamorous portion of the eventual free-agent market.

Otherwise known as where the Lakers will do most of their shopping.