As I mentioned on last week's edition of The Forum, based on the general feedback in our chats, via Twitter and on this very blog, fans are equally sick of players and owners when it comes to the lockout. At an event Thursday in Santa Monica attended by Kevin Love, I asked the Timberwolves forward if, even while emphasizing the need to stand firm, he understood why the fans felt this way. His answer didn't beat around the bush.

"It's hard to pick a side when it's billionaires fighting against millionaires. I mean, it's no secret that's what's going on here. I think in any lockout, people are gonna be disheartened in that way, because that is the case." 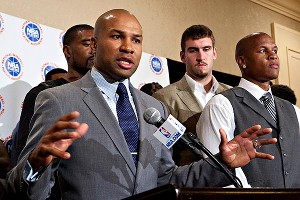 Fisher can't lead a PR win, but he can prevent as bad a loss as possible.

After Friday's meeting at the Beverly Hilton, I asked Players Union President Derek Fisher about concerns over alienating fans during the lockout. He said the topic is constantly raised, describing fans as "the engine that largely drives our business" and noting "the hard-earned money" plunked down to attend games. In other words, he said "all the right things." Not that I doubt Fish's sincerity, but these are sentiments carefully and safely crafted for public consumption. When I followed up by asking if he understood why fans wouldn't have much sympathy, he initially responded by remaining in politically correct mode.

"Of course. When you look at the unemployment numbers in our country and around the world, when you look at the fact that hard-working families are having a hard time making ends meet, and being able to pay bills and keep their homes, we get those things. We have family members of our own that go through the same things that call us when they're in tough spots, so we feel can relate as much as possible."

From there, however, Fisher dropped whatever pretenses and acknowledged the elephant in the room:

"But relatively speaking, we know where the NBA, where this business, the game of basketball, those opportunities that have been afforded to us that other people can't necessarily relate to, so we get that part of it. So that's not why we're not trying in any way, really, to look for sympathy or empathy from our fans in that regard. We don't need them or want them to feel sorry for us because we'll make less money because we've given up more percentage. That's not what this is about."

It was refreshing to hear Love and especially Fisher acknowledge without apology how, to a large degree, fans absolutely can't relate to this labor dispute. Obviously, we've all worked for a company where laborers get squeezed by the fat-cat bosses, but let's get real. No matter how this deal shakes out, the players will be better off than the overwhelming majority of Americans, many struggling to find a job and all of whom would kill to be treated in such a way. Attempting to tug at the public's heartstrings is mission impossible, but that hasn't stopped the players from occasionally trying.

For example, the "Let us play" campaign was an embarrassing ploy for sympathy. Putting aside how Twitter is a horrible medium for explaining clear, coherent thoughts on complex issues, this faux-grassroots gibberish insulted the intelligence of every ticket holder and jersey wearer. Yes, as players it's your prerogative to decline a deal deemed untenable, but presenting yourselves as the basketball version of the kids in "Footloose" skirts credibility. You all have the ability to play right now. You just don't like the terms. Thus, you're utilizing a freedom to choose, and in the case of many, a multimillion dollar nest egg while waiting out a more palatable offer.

I doubt most fans begrudge this luxury in a vacuum. Even overpaid athletes, much less the ones earning their keep, generally worked their butts off to reach the top, and professional sports by definition wouldn't be popular if everyone despised the notion of millionaire jocks. However, fans will begrudge being patronized. Fisher needn't apologize for the economic gap between fans and players. But pretending it doesn't create wholly unique circumstances for his NBA brethren would be a horrible mistake.

I've long contended it's impossible for either side to truly "win" a lockout PR battle. Players might take it on the chin a little worse as the face of the NBA, but the difference will be negligible at best. The longer we go without basketball, the worse both sides look. "Survival mode," relatively speaking, is simply to avoid moves making your side even less likable.

Unlike the 1998-'99 lockout, which took place before the Internet truly exploded, 24/7 media and social media has made it exceptionally easy for fans to understand labor negotiations. There is an overload of information easily accessed. They may be sick of hearing about B.R.I. or the intricacies of a proposed 50/50 split, but that only comes from being in the loop. As a result, fans aren't getting snowed, particularly by transparent spin.

David Stern's recent media blitz was so aggressive, I expected an animated appearance as himself on Sunday's episode of "American Dad." However, ubiquitous doesn't equal persuasive. If the Commish thinks it's not obvious owners take the fans' return for granted while transparently using the season as leverage, I've got a bridge in Brooklyn to sell him. Stern may have offered some reasonable points, but he and the owners remain the same bad guys as before. Just like the players even after some legitimate gripes presented Friday by Fisher, Mo Evans and Billy Hunter.

Chief among the ways to add even more bullet wounds to a foot already resembling Swiss cheese? Treating fans like they're stupid. Every now and then, like Fisher on Friday, it's best to abandon sound bite mode and chance a little honesty.