With all the talk about Dwight Howard, Chris Paul or some other elite player destined (fans hope) to don purple and gold, it's easy to forget how important it is for the Lakers to fortify the bench. The Mavericks were a testament to what can be accomplished with quality depth, and conversely, the Lakers proved what unfortunately happens when an entire bench lays an egg at once. Talent wins titles, but supporting players often ensure the stars' efforts don't go to waste. Along these lines, the Lakers have inked power forward Josh McRoberts to a two year, $6 million deal to help strengthen the bench.

Given how they're both 6'10" and one arrived to play off the bench as the other exited, some fans will be inclined to see McRoberts as Lamar Odom's "replacement," and thus grade him against LO as an acquisition. This would be a mistake, despite some similarities. They're both left-handed. They're both big men capable of making plays for others. McRoberts' 2.1 assists per game -- in just 22 minutes -- ranked him 16th among power forwards, and over 48 minutes, he'd average 4.5. (The latter figure tied for fourth, by the way, with none other than Lamar Odom.) McRoberts sees the floor well, and should mesh well on a Lakers team with no shortage of quality passers. 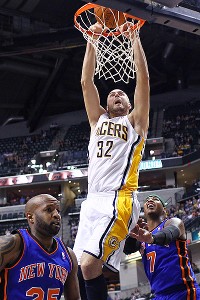 McRoberts has limits, but can be useful, especially around the rim.

Oh, and for Laker fans who actually liked "Khloe and Lamar," McRoberts reportedly enjoyed a brief dalliance with "Hills" starlet Lauren Conrad. So there's that.

However, there are considerably more differences, most notably that LO is All-Star caliber, while McRoberts is a role player still developing after three seasons of limited minutes. For more on where "McBob" -- as the kids often call him -- currently stands as a player, Tim Donahue from the True Hoop Network's Pacer blog 8 Points, Nine Seconds was kind enough to provide us with a scouting report:

Josh is an athletic, but smallish big man that is best suited to play the 4, but can play a little 5 in a pinch. He was a part-time starter for the Pacers last year, but he's only played a little under 2,500 minutes in his four-year career.

Offensively, he's very limited. Basically, his scoring moves consist of fastbreak dunk, alley oop dunk, garbage bucket, and the occasional set shot three-pointer. He has no post game, to speak of, and should generally be considered to be the fourth or fifth option of any fivesome. However, he's a low-usage guy who can fit pretty well when there are other hungry mouths on the floor. While his scoring options are limited, he helps his cause by being well aware of this. His efficiency numbers were fantastic last year, with an eFG% of .576 and a TS% of .608. McRoberts also sees the floor relatively well in general, and passes well for a big man, which are pluses.

Defensively, he's fair-to-middling. He works hard, but he is neither good (nor bad, really) with positional or help defense. Some of McRoberts' issues may have been the result of Jim O'Brien's complex system and short leash, and some could just owe to lack of experience. Though he'll get the occasional highlight block, he is not anything approaching a consistent shot blocker. He also lacks both the strength and quickness that Jeff Foster has used to build a career as an effective defender on players bigger than him. He could develop into a good defensive rebounder, but he isn't one right now.

There will be fleeting moments where he will look like a poor man's Lamar Odom (AK's note: Irony alert!), but he simply doesn't have the overall talent to sustain that. In the right group of players, he could be a very nice rotation player. Like the vast majority of players in the league, the best way to maximize his contribution is simply not to ask too much of him. He'll hustle, get some dunks, get some boards, and do little things. If you ask for him to be a prominent part of the offense, or a defensive stopper, he'll let you down.

Of course, if the Lakers are actually asking him to do either, something went horribly wrong this season. As an eighth or ninth man, McBob is nicely priced addition. However, he has no business being a key member of the rotation. Not that this was a meaningless signing. The entire mini mid-level exception, the team's primary means of bringing in any free agent of note, was used to land him. Thus, anybody else signed off the street will be at the league or veteran's minimum, and in most cases, you get what you pay for. McRoberts will likely play 15-20 minutes a night, and it's important he contribute.

But in terms of either truly filling Lamar's shoes or a presence to calm Laker fans' frazzled nerves, that will come either using the trade exception created by the Odom transaction or one of the big deals Mitch Kupchak admitted the team is trying to swing. Until then, accept McRoberts for who he is. A dude who'll hustle (top-12 for steals or blocks per 48 among power forwards), share the ball, and do things like this.

Nothing less should be accepted. Nothing more should be expected.