Hope nobody got used to that whole "4-2 road trip" thing. Linsanity continued for another night at Madison Square Garden, and the Lakers lost to the Knicks 92-85, meaning with a win over Toronto on Sunday, the best the Lakers can do is 3-3.

On the heels of an impressive win in Boston, it was definitely a disappointing 48 minutes for the purple and gold. Here are five takeaways: 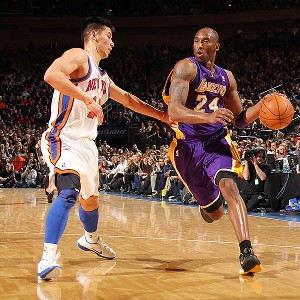 Mike D'Antoni's defensive scheme was basically to throw bodies at Kobe Bryant on nearly every touch and at Bynum whenever he caught it in the post. While Bynum has shown reasonably steady improvement in working through double-teams, on Friday night, he couldn't get it going. He struggled to anticipate how bodies would be sent at him and from where. Sometimes he went for his shot too slowly, other times too fast, and as the misses mounted, so did Bynum's frustration. In the third, Bynum got the ball on the left block, turned to the basket and found a wall of white jerseys. He made the right play, passing out to the perimeter, but his shoulders dropped immediately. The body language was clear.

By the end, Drew was missing chippies at the rim. He finished with three points, missing all but one of his eight shots.

Defensively, Bynum did his best to seal off the paint and got after it on the glass (13 rebounds), but in a game I'm sure he thought he'd dominate on both ends, things never opened up. In part because ...

2. The Lakers give teams absolutely no reason to lay off the post.

As it was in Boston, the Lakers' 3-point shooting was again suspect, at 6-of-24 overall. And generally speaking, these weren't the hand-in-the-face variety, either. The Lakers simply missed more wide-open triples than any NBA team should. Kobe was 1-for-5, Steve Blake 1-of-8. If the Lakers can't space the floor, even undersized teams will have the ability to cheat down on L.A.'s bigs and clog the paint.

At halftime, Jeremy Lin had 18 points. Fisher's four points at the break (coming on five shots) pushed his point total on the entire road trip to 22. He'd add one more bucket in the second half, finishing with six points on 2-of-7 from the field and leaving him at well less than 30 percent from the floor over the past five games. Meanwhile, Fisher struggled to contain Lin on the other end, although his teammates didn't exactly lock him down, either. But Lin's great game -- 38 points, seven assists -- only emphasizes the productivity vacuum the Lakers face nightly at point guard. Fisher and Blake combined to score 12 points on 18 shots.

Low output, provided with total inefficiency. Not a good combo.

4. The Lakers lost any semblance of an offense.

Make no mistake: Defensively, the Lakers were good enough to win.

Yes, the Knicks scored 26 points in the fourth and seemed to make every shot late, but for the most part, the Lakers did everything they could to compensate for an absolutely brutal offense. Once again, they didn't hit the 90-point mark, and they shot only 37.5 percent from the field. As it was during L.A.'s loss in Milwaukee, the Knicks threw a lot of ball pressure at the Lakers and they were unable to respond. Any element of offensive balance totally disappeared. Kobe finished with 29 shots, and only Pau Gasol and Blake joined him in double figures.

No question, Bryant decided down the stretch he was going to win or lose the game on his own. Was that because he felt compelled to play hero, or because the Lakers simply couldn't generate any sort of offensive flow? I'm not sure it's possible to separate the two on a night like this. Bynum couldn't get it going inside. The supporting cast couldn't hit the shots it had, and Mike Brown struggled getting Kobe clean looks away from ball pressure.

He forced things, without question, and it didn't help. Even with a second-half rally, Bryant finished with 18 misses in 29 tries. Still, his game felt like a symptom of the problem, rather than the cause.

On the heels of Thursday's overtime grind fest, fatigue was likely a factor in the team's offensive breakdown. On the other hand, the Lakers still found ways to get the job done at the other end, and given how much of a struggle scoring has been throughout the season, only so much can be pinned on dead legs.

We've long noted how MWP becomes a near total liability on the floor if he's not locking someone down defensively, and Friday's game underscored the point.

After seeing limited playing time in the first half, World Peace wasn't any better in the second. He focused more on Knicks forward Bill Walker than the happenings in front of him, then in the third, he picked up two silly loose ball fouls, costing the Lakers points and possession. No points, no assists, three turnovers, three fouls in 12 minutes.

Matt Barnes had a strong first half and overall was pretty good, but just like at PG, the Lakers continue to play with a giant hole at the 3.