Among the best shows to hit television in the last few years is AMC's 'The Walking Dead,' an engrossing look at a post-zombie apocalypse containing plenty of gore and frightening moments, but even more storyline and character development. Among the more interesting of those characters is Hershel Greene, the aging veterinarian and farm owner who provides safe haven for the ragged band of survivors led by Rick Grimes. 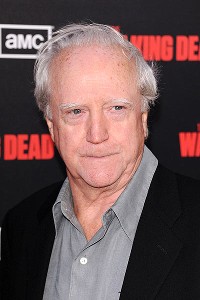 The role of Green is played by veteran character actor Scott Wilson, who in a career spanning almost 50 years has worked with directors including Norman Jewison and Richard Brooks, and along side legendary actors like Sidney Poitier, Robert Redford, and Gene Hackman. And in a nice bit of luck, he happens to be my upstairs neighbor.

Ahead of Sunday's season 2 finale (Sunday, 9 p.m. on AMC) Wilson joined us in studio for an extended conversation, answering all sorts of questions about the show, including whether he thinks Hershel knew Sophia was in the barn (if you watch, you know what I'm talking about). Highlights include:

Finally, Wilson, a big basketball fan who earned a scholarship to play out of high school, talked about moving to L.A. at the same time the Lakers arrived, and going to watch Jerry West and Elgin Baylor in the days when struggling actors could actually afford to do it.

For fans of 'The Walking Dead' and of movies and Hollywood generally, it's a conversation worth hearing.