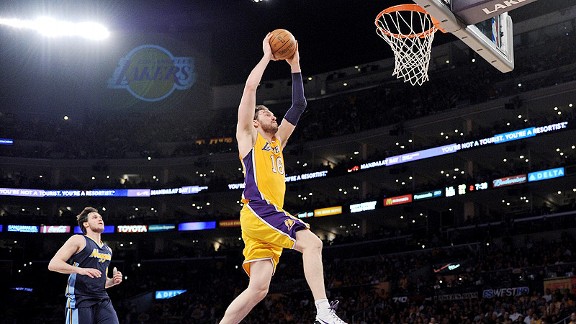 The ink hadn't yet dried on the new collective bargaining agreement between players and owners when the Lakers sent Gasol to Houston as part of a three-team deal netting them Chris Paul. As you may have heard, a couple hours later the Commish put the brakes on the deal, sending everyone back to his team as if nothing had ever happened.

Except it had, and everyone saying all the right things didn't make it any less awkward.

Since Gasol had already been traded once, the natural supposition was it might happen again, leaving him smack dab in the middle of the NBA's juiciest trade rumors from that moment through March and the trade deadline. Not surprisingly, renting in Limboland wasn't all that appealing, prompting Kobe Bryant in late February to publicly demand the Lakers offer the Spaniard some clarity. It didn't come, but Bryant's comments once again highlighted the elephant in the room.

On the floor, Gasol faced another sort of limbo. A variety of factors -- the ascension of Andrew Bynum into a prime time role in the post combined with Kobe Bryant's still-dominant offensive role, a lack of facilitators on the wing outside Bryant, a lack of floor stretching shooters, a compressed training camp and practice schedule not allowing players to fully absorb Mike Brown's system, Brown failing to make the best of his talent, and so on -- made it difficult for Gasol to find comfort in Brown's system, offensively.

As he explained during last week's exit interview:

"I never had to search for offense or for looks in teams I've been on. They've always been, not given to me, but I always had them because of what I bring to table. So to have to go and search, I have struggled at points, at times with that. But obviously when you have certain players are also very good contributors on the offensive end, you have to make sure combine all those weapons, make them work at their best. And that takes a little bit of time, too ...

I always like to be aggressive and proactive, but I was still trying to adjust to the fact it was different. I wasn't getting the same things I was getting before. I'm not used to attacking from different positions on the court. Analyzing a little more made me think of it a little more. But I don't like excuses at all. It's just analyzing and seeing the fact and understanding why things happen a certain way."

So what happened, exactly?

For all the hand-wringing in some corners over Gasol's performance, the final numbers weren't all that different than his career norms, and in some ways they were superior. Thrust into a facilitator role, Gasol delivered, averaging more assists per game and a higher assist rate than any season in Los Angeles (with plays like this, it's easy to see how). He was a borderline All-Star and wasn't that far off from making the All-NBA team. This despite rarely being a featured player in the offense.

His shooting percentage was down, mostly because Gasol hoisted more shots from lower percentage areas on the floor (16 feet and beyond). It certainly wasn't because he lost his touch on the block. Via Synergy, no Laker averaged more points per possession in the post than Gasol's .968. More positives: Only Dwight Howard and Kevin Love had more double-doubles. Gasol tied for the team lead in offensive rating, and led in win shares. Via 82 Games, the Lakers were 4.1 points better offensively with Gasol on the floor, and 4.5 points better defensively -- the best margins among L.A.'s Big Three.

Bottom line, anyone believing Gasol wasn't productive or somehow hurt the Lakers over the course of the season is simply mistaken.

In a lot of ways, Gasol's season was encapsulated in the fourth quarter of Game 5 in Oklahoma City, when he and Bryant couldn't get on the same page on how to run a pick and roll. This play once so automatic between the two seemed foreign at the end of a season where Gasol and Bryant didn't click. As the season progressed, it was clear the Lakers didn't have Gasol in a role best suiting the full range of his talents, or justifying the league's seventh highest salary ($18.7 million).

Turning Gasol into a facilitate-first player played to his lesser tendencies as well, codifying to some degree the passivity for which he is frequently criticized. No surprise aggressiveness was periodically a problem. Taking a player who periodically requires reminders to call his own number and asking him spend most of his time calling everyone else's isn't a winning formula.

Thanks to his shot locations and fewer trips to the line, Gasol's efficiency dropped. Then there were the playoffs.

Gasol had big games for sure -- a near trip-dub in Game 1 vs. Denver and 23/17/6/4 in Game 7 were the best -- but too many clunkers as well. His Game 6 (three points, three rebounds, 1-of-10 shooting) in Denver might have been his worst performance as a professional. In the second round against Oklahoma City, the Lakers needed all three of their stars in top form to have a chance, and Gasol didn't hold up his end of the bargain (in that he had company, it should be noted). This isn't about re-litigating his critical fourth quarter turnover in Game 4, one in a string of bad plays for the Lakers, many belonging to Kobe, but his overall impact. In five games, Gasol averaged only 12.6 points, 2.6 free throw attempts, shot 44 percent, sported a poor A/TO ratio of nearly 1/1.

All told, numbers not up to the standard to which he should be held.

With the Lakers in a bind competitively and financially, it's widely expected they'll once again shop Gasol this offseason. While there's no guarantee he'll move (flipping a soon-to-be-32-year-old owed about $38 million over the next two seasons isn't a slam dunk, and there are other forms of roster architecture the Lakers can employ), he'll certainly be available. It's why rumors like this one from Sam Smith of Bulls.com in which "Lakers insiders" --vague even by today's liberal titling standards -- say Gasol wants a trade to Chicago will come on a near daily basis once the NBA truly enters the offseason. (For the record, Gasol denied he wants to go.)

My guess is Gasol won't be in a Lakers uniform next season, and will be missed in ways many fans likely don't realize. Still, the dynamics of the team have shifted to the point a change could benefit both parties.

Gasol basically did what he was asked to do this year, performing at a deceptively high level and holding his tongue despite real frustration regarding his role. He was, as Bryant and Mitch Kupchak (among others) noted throughout the season, a consummate professional in a disjointed year. With a better postseason, the grade would have been higher.