How the Lakers match up: San Antonio Spurs
9yAndy Kamenetzky
NBArank 2021: Where the final five check in, including LeBron, Giannis and KD
Milwaukee Bucks
17h
Debating LeBron's spot and the biggest surprises of NBArank 2021
Los Angeles Lakers
17hNBA Insiders
Pelinka expecting fully vaxxed Lakers by opener
1dDave McMenamin
Who's No. 1? The cases for LeBron, Giannis and every star remaining on the NBArank countdown
2d
The evolution of NBArank: Lessons from a decade of ranking the league's best
5dKevin Pelton
Dennis Schroder pokes fun at how he 'fumbled the bag'
9dBrianna Williams
NBA predictions: Does Team Turmoil reside in Philadelphia or L.A. this season?
8d
How Carmelo Anthony almost traded hoops for homers
10dJames Jackson
Our experts' picks for MVP and Finals winners
9d
Sources: Grizz to get, cut Gasol after Lakers deal
14dAdrian Wojnarowski
Lakers' DAJ: KD, Kyrie 'bros. beyond basketball'
15dDave McMenamin
NBA predictions: Why our West forecast has the Lakers and Clippers headed in opposite directions
10dNBA Insiders
Aug 16, 2012

For the past several seasons, the San Antonio Spurs have served as basketball's version of Jason Voorhees: They cannot be killed. Since about 2008, fans and media (I've been as guilty as anybody) have cited their long teeth, declining athleticism and rising competition as reasons to declare the end of an era. But the Spurs refused to fade into the sunset, having finished consecutive regular seasons with the West's best record. Yes, the ensuing postseasons were anti-climactic, but either way, the message was made clear: The Spurs are still formidable. The Lakers learned that lesson as well as any team last season, losing twice to San Antonio -- home and away, with and without Kobe Bryant -- by 20+ points. 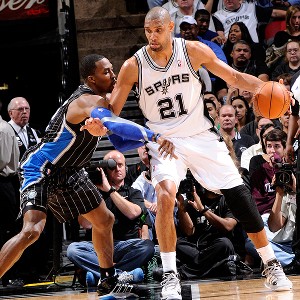 With Howard in L.A., the game just changed between the Lakers and Spurs.

But this off-season it appears the scales have been tilted towards Los Angeles. For some perspective on how the new-look Lakers appear from San Antonio, we talked via email with Tim Varner from the True Hoop network's 48 Minutes of Hell blog.

Land O' Lakers: What was the general reaction in the 48 Minutes of Hell-osphere when word broke that Howard was heading to the Lakers?

Timothy Varner: In general, we recognize that it puts the Spurs behind the Thunder and the Lakers in the West. Even worse, the Nuggets improved themselves as well. The Spurs could be fourth in the West.

TV: The worst part about the Howard trade is the Spurs' weaknesses along the front line. The Lakers not only improved themselves, they did so in a way that exploits one of San Antonio's roster deficiencies.

LOL: How much can someone like a (theoretically) improved Tiago Splitter help? And I guess this might actually keep DeJuan Blair in town.

TV: I don't think either player helps, unfortunately. Splitter does not do well against Howard, and Blair will be traded as soon as the Spurs find a good partner. He's an especially awful matchup against Howard and Gasol. Splitter, I should also note, is an expiring contract with good value whom San Antonio may not be able to afford next season. So, somewhat counter-intuitively, Howard could force the Spurs to move Splitter for a roster upgrade at another position.

LOL: On the plus side, nobody will mind if Boris Diaw packs those pounds back on. It might be necessary.

TV: True, but within the Spurs' offense, Diaw is more of a passer for the p-and-r than a post player. So even his re-signing tilts away from bolstering the frontcourt in the sense of matching bodies with bodies.

LOL: That's too bad, because there's always a 50/50 chance Diaw will be wearing a "bro" to begin the season. The weight might as well provide some utility.

TV: I suspect the Spurs understand they can't match Howard and Gasol, so they will look to beat the Lakers in other ways.

LOL: Run them off the court, I assume? Or pick-and-roll them to death? Last season, Manu Ginobli and especially Tony Parker dizzied the Lakers with multiple pick-and-roll sets, often within the same possession.

TV: That's right. Pace and p-and-r are better options for San Antonio than adding more (seemingly useless) bodies to the front court. Look at what the Spurs have done this off-season. They added Nado De Colo, re-signed Patty Mills (high pace point with range) re-signed Danny Green, and concentrated on the development of Kawhi Leonard and Cory Joseph. Those are all moves with San Antonio's offensive attack in mind, especially as it originates from the back court.

LOL: Andrew Bynum had that monster 30-rebound game last year against the Spurs and has generally played well against Tim Duncan (his idol). Howard is the better player, but looking specifically through the prism of this matchup, could the Spurs benefit at all from seeing Howard rather than Drew?

TV: I agree that Bynum was a force against the Spurs, and am happy to see him in the Eastern Conference. But Howard is at another level. From the Spurs' perspective, I don't think there is anyway to look at this and not hate the trade. Plus, assuming Howard stays with the franchise, it keeps the Lakers relevant for years.

In the meantime, we're several hundred words into this discussion and neither of us have even mentioned Steve Nash! The combination of Nash and Howard is terrifying. 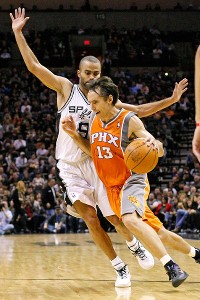 It's always fun when these two square off.

LOL: For thoste not in the know, Howard was basically the best roll man in the league (statistically speaking), and you may have noticed, Nash runs a solid pick-and-roll.

TV: Now you're just throwing salt into the wound. For those in the know, San Antonio is a middling defensive team against the p-and-r.

AK: Oh, and by the way, Kobe and Pau (yes, Pau) can also initiate pick-and-rolls. I've heard people describe the Lakers' starting 5 as unguardable. How do you think the Spurs will attempt to defend them?

TV: It's desperation logic, but one hopes Howard contaminates the Lakers' locker room like he did in Orlando. One also hopes that the Spurs' speed at point guard is too much for Nash. And one hopes that Kobe's quiet slide into a B-Player is more pronounced this season. But that's a lot of hoping.

However, one of Gregg Popovich's great moments came last season when he conceded the Spurs could not, with their personnel, expect to win championships on the strength of their defense. Pop's slow, two-and-a-half season pivot from a defensive to an offensive power is one of the great maneuvers in recent coaching history. I don't see him making a reverse pivot toward the direction of trying to beat teams with their defense.

For the Spurs to keep up with the Joneses, Leonard must continue to improve.

The Spurs will look to beat the Lakers by overwhelming them with speed, 3-point shooting and point guard play. On defense, they will simply attempt to limit the bleeding. The Lakers are basically unguardable. No sense in pretending otherwise. 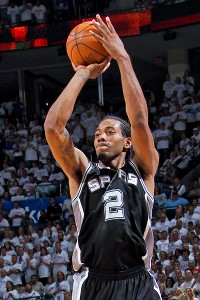 For the Spurs to keep up with the Joneses, Leonard must continue to improve.

LOL: One of San Antonio's strengths last season was their bench and depth. Conversely, it was a Lakers weakness, but with the addition Antawn Jamison and Jodie Meeks, with Jordan Hill re-signed and less pressure on Steve Blake, they're theoretically better set. How much do you think the reserve units have evened out?

TV: Some of that depends on Brown's ability to get maximum effort from his reserves. Jamison is a nice fit on offense, but he was a defensive ghost last season. Against an offensive powerhouse like the Spurs, he might take away more than he gives. But the Spurs' bench advantage has diminished this summer. Where they could see improvement is the starting unit. Kawhi Leonard could become an All-Star in the near future and and Danny Green has not yet hit his ceiling. Obviously, that is not the same as adding a Hall of Fame point guard or the league's best center, but the Spurs' starting unit should improve.

One strategy I'd employ, if I were the Spurs, is playing for the top seed in the West. That is counter to all things "Popovich," but if the Spurs can count on the Thunder and Lakers playing each other in the second round, they'll only have to beat one of them to make it to the Finals.

TV: Duncan will never play that many minutes. But that does raise a question. R.C. Buford makes smart deals, although Mitch Kupchak's are always more splashy. The Spurs have tremendous cap flexibility, and Manu, Splitter, and Stephen Jackson are all expiring contracts. The questions is what do the Spurs do between now and March? They're playing to win, and they have the smarts and assets to make a good move to help against the Thunder, Lakers, and Heat.

The Spurs are currently outside the NBA's circle of ultra elite teams, but they can still break in. They're not so far outside that all hope is lost. Buford doesn't play plans, he plays his best options, as they develop. And he's patient. I'm simply saying the Spurs will improve themselves over the course of the season.

LOL: Finally, how do you think they now stack up against the rest of the NBA landscape?

TV: I think the Lakers have the best roster in the league. I'll stop short of calling them the best team.

LOL: Still the Heat or Thunder, I assume? Or are you expecting big things from the Bobcats?

TV: The NBA Finals often comes down to who has the best player, not the best roster. In that regard, the Heat are still the favorites. Right now, I'd predict a Lakers-Heat Finals.