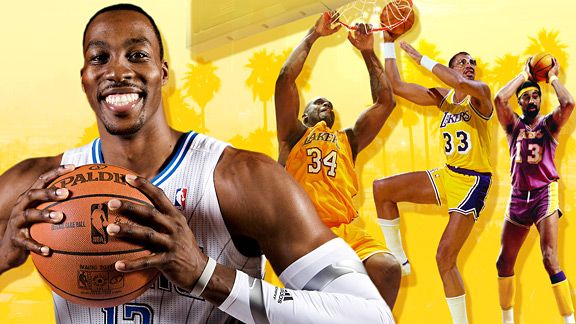 LOS ANGELES -- Before Dwight Howard was introduced as the Los Angeles Lakers’ newest center last month, he took a quick tour of the team’s training facility. As he walked around Jeanie Buss’ office, he took a long look at the 10 Larry O’Brien trophies the team has won in Los Angeles since 1980 before gazing out her window at the retired jerseys on the walls surrounding the practice court.

“We're hopeful that 10 years from now,” Kupchak said, “we can add a jersey to that wall over there that says Dwight Howard.”

If Howard is to join the likes of fellow big men Wilt Chamberlain, Kareem Abdul-Jabbar and, later this season, Shaquille O’Neal with retired jerseys at the Lakers’ practice facility and Staples Center, he will have to deliver much like his predecessors in the paint did.

And much like Chamberlain, Abdul-Jabbar and O’Neal, Howard was acquired by the Lakers in what is considered the prime of his career and with the expectation of winning championships.

Before and after Wilt

A look at Wilt Chamberlain's effect on the Lakers.

We also looked at the field goal percentage of the other Lakers on the court (by taking the team’s field goal percentage and subtracting all the attempts by the big man) and the opponent free throw rate and shooting percentage -- under the theory that a dominant big man forces teams away from the basket, which should equate to fewer fouls drawn and more missed shots.

Chamberlain was traded to the Lakers on July 9, 1968, from the Philadelphia 76ers for center Darrall Imhoff (who Chamberlain scored 100 points on when Imhoff played for the New York Knicks), forward Jerry Chambers and guard Archie Clark.

Chamberlain became the first reigning NBA MVP to be traded the following season. Chamberlain led the league in rebounding his first season with the Lakers, averaging 21.1 boards per game, and field goal percentage (.583), as the Lakers improved their win total by three games and won the Western Division. Chamberlain’s rebound average in 1968-69 is the highest in club history.

While the Lakers held teams to 7.5 fewer points per game with Chamberlain, they also scored 9 fewer points and the team’s field goal percentage not including Chamberlain dipped by 2.7 percent.

One of Chamberlain’s best games for the Lakers came midway through his first season, when he converted a perfect 14-of-14 field goals, the greatest shooting performance in club history and fourth-best in NBA history.

Before and after Kareem

A look at Kareem Abdul-Jabbar's effect on the Lakers.

Chamberlain, however, was unable to win a championship in his first season with the Lakers, who lost to the Boston Celtics by two points in Game 7 of the NBA Finals in Los Angeles. He would lose in Game 7 of the Finals again the following season, this time to the Knicks. It wasn’t until his fourth season in L.A., and under the direction of his third coach with the Lakers, that Chamberlain finally won a championship following the trade.

Abdul-Jabbar was traded to the Lakers on June 16, 1975, from the Milwaukee Bucks along with center Walt Wesley for center Elmore Smith, guard Brian Winters and rookies Dave Meyers and Junior Bridgeman. Abdul-Jabbar won the NBA MVP during his first season in L.A. -- the first Lakers player to do so -- after leading the league in rebounding (16.9) and blocked shots (4.12). He also was second in the league in scoring (27.7) and fifth in field goal percentage (.529).

Abdul-Jabbar’s biggest impact on the team came in the win-loss column, as the Lakers recorded 10 more wins after his arrival. While the Lakers improved across the board with Abdul-Jabbar at center, the Lakers failed to make the postseason for the second straight season, which is the only two-year playoff drought in team history. It wasn’t until his fifth season in L.A., and under his fourth coach with the Lakers, that Abdul-Jabbar eventually won a championship with the team in 1980. Of course, he had some help from a rookie by the name of Magic Johnson, who would team up with Abdul-Jabbar to win five titles with the Lakers during the 1980s.

Before and after Shaq

A look at Shaquille O'Neal's effect on the Lakers.

O’Neal signed with the Lakers on July 18, 1996. He was the centerpiece of what was the largest single-season turnover in franchise history and was joined by rookies Kobe Bryant and Derek Fisher. O’Neal led the Lakers in scoring (26.2), rebounding (12.5), blocked shots (2.88) and field goal percentage (.577) in his first season in L.A., becoming the first Laker since Abdul-Jabbar in 1984-85 to accomplish that feat. O’Neal, however, missed 31 games during his first season due to an injured left knee.

And the Lakers’ field goal percentage without O’Neal dipped 5.2 percent from the previous season.

Despite improving their record from the previous season by three wins, the Lakers finished the season second in the Pacific Division and lost to the Utah Jazz in the second round of the playoffs. It wasn’t until O’Neal’s fourth season in L.A., and under his third coach with the Lakers, that O’Neal collected his first championship ring.

Perhaps the most telling takeaway in looking back at the Lakers’ three previous superstar big men is that each one needed at least four seasons and three different coaches before winning his first title with the Lakers.

That time frame likely won’t work for Howard if he wants to win a title with the current group. Steve Nash, 38, is signed for the next three years. Bryant, 34, says he will probably play for two or three more seasons. And Pau Gasol and Metta World Peace are signed for only the next two seasons.

Oh, and let’s not forget the small detail of Howard needing to commit to the Lakers past this season.

The best parallel to Howard’s arrival in Los Angeles is probably Chamberlain’s arrival in 1968. The Lakers already had a solid nucleus, headlined by Jerry West and Elgin Baylor, perhaps the best one-two punch the game had ever seen. They had led the Lakers to the NBA Finals five times in the previous seven seasons before Chamberlain’s arrival and lost each time. With Chamberlain they returned to the Finals the following two seasons and lost before finally winning in 1972.

It’s reasonable to expect Howard to help the Lakers get past the second round, but, if it comes to it, can he get them past the Oklahoma City Thunder in the Western Conference finals or the Miami Heat in the NBA Finals?

There’s no question Howard will make a massive difference on the court for the Lakers and will probably put up individual numbers from the center position the Lakers haven’t seen since Chamberlain, Abdul-Jabbar and O’Neal were manning the paint.

But if Howard wants to join his predecessors in the championship department, he will have to win his first one more quickly than they did in L.A. ... as most of his current supporting cast will be long gone four seasons and three coaches from now.

Information from ESPN Stats & Info’s William Cohen was used in this report.