LOS ANGELES -- Growing up in Los Angeles, Nick Young watched many Los Angeles Lakers games end with their stars burying iconic game-winners. Kobe Bryant authored plenty of them, and Robert Horry hit his share of memorable daggers, plus there was Derek Fisher's unforgettable swoosh with 0.4 seconds left against the Spurs in the 2004 playoffs. Young saw all these highlights and always wanted one of his own. On Tuesday, he earned it in the most Nick Young way imaginable. 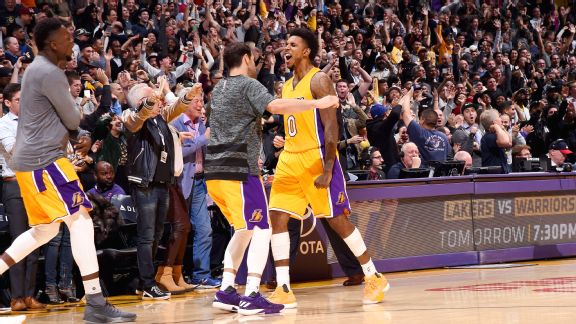 Swaggy P saves the day in Lakerland to headline Tuesday night's best from the NBA.

• The Nick Young renaissance continues
• 'Vintage' D-Rose is gone -- and he's just fine with that
• Bulls hoping they can learn from late loss
• MJ, Kareem and true American excellence

"Mine is kind of unique because I stole it from my own teammate," the Lakers guard said with a laugh after the Lakers' 111-109 win over the Oklahoma City Thunder at Staples Center. "It wasn't designed for me, but that should go down in history."

Indeed, the Lakers' final play was designed for someone other than Young to take the final shot, but Young intercepted a pass meant for teammate Lou Williams, then launched a 27-footer with 5.0 seconds left.

"He kind of came out of nowhere," Thunder guard Victor Oladipo said.

The shot fell through, and Staples erupted.

"They should've given me a steal for that!" added Young, who finished with 17 points on 6-of-12 shooting, including 4-of-7 from 3-point range. "[Williams] let me know after the game; he told me I was lucky I made it."

The shot marked one more example of Young's remarkable turnaround from his past two seasons, when he clashed with ex-Lakers coach Byron Scott and saw his minutes and production plummet. Only a few months ago, Young believed the Lakers would trade him, buy out his contract or cut him. He was sure the team was done with him, one way or another.

Now he's in the Lakers' starting lineup and considered one of their best perimeter defenders and most reliable scorers.

"Obviously, one of the reasons we like Nick on the court at the end of the game is because he is not afraid of the moment," Lakers coach Luke Walton said. "He loves the moment."

As Young celebrated on the court, he pointed to his arm and shouted, "Ice in my veins!" -- the celebration that teammate D'Angelo Russell has made his own. Russell, who sat out because of a sore knee, was nearby and smiled wide, appreciating the homage, and celebrated, too.

The moment seemed to create more distance between the scandal that enveloped the two guards and divided the locker room late last season, when a leaked video recorded by Russell surfaced, showing Young talking about women other than his then-fiance, Australian rapper Iggy Azalea.

"He hurt," Young said Tuesday of Russell. "Got to give him a shoutout."

And so the Swaggy P renaissance continues, taking one wild, unexpected turn after another.