CLEVELAND -- In one corner of the Los Angeles Lakers' locker room late Saturday night, several young players gathered, their eyes wide. They were trying on the Cavaliers' 2015-16 championship ring that ex-Cavalier and current Laker center Timofey Mozgov received in a pregame ceremony, before the Cavaliers beat the Lakers 119-108. The young Lakers felt its weight, admired its size, shine, design and diamonds. They eventually returned it to Mozgov, but that piece of hard-won jewelry remained a talking point as the evening progressed. Its sparkle never left their eyes.

Not far from where those Lakers stood, rookie forward Brandon Ingram absorbed some apologies. Lakers guard Jordan Clarkson told Ingram that he was sorry he didn't do more in the game to help Ingram earn a triple-double. "There will be another time," Ingram replied after finishing with nine points, nine assists and 10 rebounds, falling just shy of being the youngest NBA player ever, at 19 years old, to record a triple-double; the current youngest is a player whom Ingram faced Saturday, LeBron James, who achieved that feat when he was 20.

The two moments felt intertwined. On the second night of a road-road, back-to-back, on the home court of the defending champions, Ingram showed more promise than he has at any point since being selected No. 2 overall by the Lakers in the 2016 draft. He showed the kind of promise that makes the 6-foot-9 Ingram a potential cornerstone of the Lakers' future, the kind of player who one day might win a ring for himself -- and help his teammates win one, too. "I think my drive, for one, is sky high anyway," Ingram said. "That's why we play this game."

Lakers coach Luke Walton gushed about Ingram's performance, which came with Ingram starting at the point guard spot to fill in for D'Angelo Russell, who rested because of his sore left knee.

"That's the best I think [he's been] and most confident he's looked all season," Walton said. "When he was playing point today, he was kind of controlling and demanding the offense and getting people into position and coming off looking not just to shoot every time, but reading how the defenses were playing." 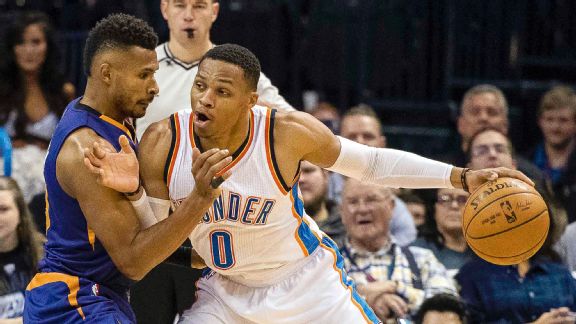 • What if Shammgod was one with Russ?
• Durant's efficiency leads Warriors
• Rest of the winning story for Kyrie
• Boston's second unit not first rate
• Ingram almost nets triple-double
• Spurs tale: Pat the Manu

The soft-spoken Ingram was more vocal than ever Saturday. "Yeah, I could even hear him today from my side of the court," Walton quipped. "It was the first time all year I could hear him calling stuff out, which obviously is what we want."

Ingram admitted that he made himself heard because he brought more energy to the game, but he said being louder is something he must force himself to do on a nightly basis, because doing so just isn't his nature. As he gets more comfortable, Ingram said, he'll improve in that area. After all, he's just 19.

For now, though, Saturday marked a mighty step forward for a player who at this time last year was a freshman standout for Duke, and who at this point is adjusting to players physically testing his frail frame in every game. But Ingram's near triple-double left his teammates impressed, especially considering how close he came to history.

"He'll have many of those in his career," said Lakers forward Julius Randle. "He has a long time." Ingram echoed that point, and in so doing gave Lakers fans another reason for hope, not only for this season, but beyond.

"It'll happen again," Ingram said. "If it happened once, I can do it again. We just played the right way tonight. I think that's the reason I got that."

Indeed, what Ingram said about his drive to win a ring seems also true about his overall ceiling as player -- both are sky high.