After Thursday's game, I noted the spot where momentum changed for the Thunder in their 101-96 Game 3 win. OKC scored eight points in 59 seconds, fueled by a thunderous Russell Westbrook dunk over Lamar Odom coming with just under two minutes remaining in the third quarter. 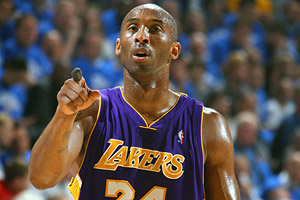 You, at the computer. Do you think I shot the ball too much down the stretch? Do you?

Still, the Lakers went into the final period up one point, and certainly were in position to win if they played well down the stretch.

For most of the season, the Lakers have (by their standards) struggled offensively, and Thursday's final period was no exception. The Lakers became incredibly Kobe-centric and totally ineffective.

This morning, I went back to the DVR and took a look at the first 12 possessions of the fourth quarter to see where things went off the rails. As a point of reference, the Lakers started the period with Kobe Bryant, Shannon Brown, Jordan Farmar, Andrew Bynum, and Odom on the floor:

Possession 1) Brown brings the ball up the left side, and hits Kobe as he pops out to the left wing high above the arc. Bynum flashes up to accept a pass, initiating the offense, but Bryant waves him off. Matched up against James Harden, he wants to exploit the rook. With Bynum clearing out, Kobe backs Harden down to the left elbow and tries to get him in the air with a series of pump fakes. Harden elevates, but not enough to create contact. Kobe misses as he jumps into Harden trying to draw the whistle.

Possession 2) Kobe starts with the ball on the right wing, with Farmar in the corner and Brown at the top of the key. He looks at Bynum at the elbow, then gives back to Brown, who goes weakside to Odom, then follows the pass bringing his man (Kevin Durant) with him. Odom goes back to the right side, passing to Farmar, then sets a screen on Westbrook before rolling to the hoop. Farmar makes a nice pass through the lane to Odom who converts the shot . . . but, unfortunately for him, Nick Collison reads the play and leaves Bynum on the right block to draw the charge.

Tight call -- it looked like Collison may have slid under Odom as he went up for the shot -- but LO could have avoided the contact by making the extra pass to Bynum, totally uncovered once Collison left to help. I don't think Odom ever saw the option. (Incidentally, Joey Crawford milked this charge call like Frank Drebin behind the plate in The Naked Gun.)

Possession 3) LO comes up the right side and looks for Bynum in the post. Not there. He swings it back left, and eventually the ball ends up with Kobe isolated in the mid-post against Harden. Bryant backs him down with a couple dribbles, then spins right and makes the jumper before Harden can react and Westbrook can close in on a double-team. Tough shot, but Kobe converts.

Possession 4) Odom rebounds and brings it up the right side. Kobe is already in the post against Harden. Odom feeds Kobe, now set up at the right elbow extended. He backs him down with one dribble, then steps back and again takes the tough fadeaway jumper. This time, he draws back iron. A one-pass possession in which the ball never left the right side of the floor. 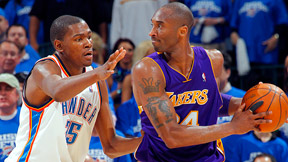 When Kevin Durant picked up Kobe Bryant defensively, a bad quarter for 24 only got worse.

Possession 5) Odom penetrates from the left side to his right and makes a nice feed to Bynum underneath, but is fouled by Serge Ibaka before the pass. Seventeen seconds remain on the shot clock, and off the restart Durant picks up Kobe, a move proving fruitful for Thunder coach Scott Brooks. Artest looks to get the ball into Bynum, but can't do so over Harden and a fronting Collison. Artest doesn't do much -- anything, actually -- to improve the angle of the entry pass. He goes back up top to Farmar, who swings it right to Kobe. With 11 seconds left on the shot clock, Kobe measures up Durant and drives left. When his penetration is cut off, he pulls up, spins to the right elbow, and again launches a very difficult turnaround J.

Again, no hint of meaningful penetration for the Lakers, and another shot hoisted with enough time left on the clock to find something better.

Possession 6) Kobe forces a Westbrook turnover, then feeds Bynum filling the lane on the break. Drew elevates from outside the restricted area, but his go-go-Gadget right arm is long enough to throw down the dunk over Collison, who fouls him in the process. He makes the freebie, and the game is tied at 80. 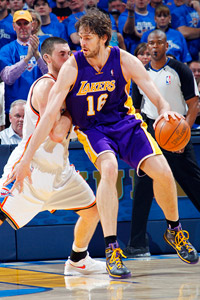 Possession 7) After a quick probe of the left side of the floor, Odom dishes to Kobe on the right wing, who looks at Bynum. Durant sags off, Collison fronts, and even Westbrook shades off of Farmar in the corner. Again, no movement, no attempt to create a better angle. Kobe goes back to Odom at the top of the key, who dishes back to Kobe. With 10 seconds left on the shot clock, Kobe breaks down Durant on the dribble and elevates, but gets trapped in the air as Collison helps. Looking to pass, Kobe throws it away. OKC goes the other way, Harden dishing to Durant for the dunk. L.A. is now down four.

Possession 8) Farmar makes an early pass to Bynum at the left elbow. He dishes to Odom and floats up to set a screen. Odom doesn't use it, but creates an angle for an entry to Artest in the post, matched up against Harden. Artest then finds Odom as he dives through the lane. Nice action, and it draws a foul on Westbrook. Out of the re-start, the ball again goes to Bynum at the left elbow, who hands it to Kobe coming over the top. Bryant draws a crowd and misses a chance to feed a diving Bynum in the lane. Instead, he again measures up Durant, isolating as the rest of the team clears out, and rises for a long jumper, which he misses.

Possession 9) Farmar starts on the left, then crosses over to the right side of the floor. He uses a Bynum screen on Westbrook to gain a little space as he drives left into the lane. As help comes, he feeds Pau Gasol (now in for Odom) on the left baseline. Gasol makes the jumper over a closing Ibaka.

Possession 10) Resetting after a wild Artest outlet pass is niftily saved by Farmar, Kobe probes with the dribble, but is cut off by Durant. He leaves it for Artest, moving right from the weak side. Artest dumps to Gasol in the block, one of the few clean entry passes to the post they've made in the quarter. As Artest makes his cut off of Gasol's hip -- not a very hard or purposeful cut, it should be noted -- Westbrook stops to harass Gasol. Once he clears, Pau seems to be anticipating more company, and gets stuck between making a move and making the pass. With the shot clock running down, Gasol spins into the lane against Ibaka, who does a great job defending him, and misses.

Possession 11) After the ball switches sides (a Halley's-Comet-like rare occurrence), Pau gets it in the mid-right post. Fisher cuts baseline, with Westbrook stopping briefly to help on Gasol. Seeing this, Pau rises and hits Fisher, now set up in the left corner. Artest tries to drop down and create more traffic for Westbrook as he recovers, but is cut off by Collison. From here, it's just Westbrook's great quickness that closes down the play. What looked like an open three in rhythm from Fish is cut off. He passes to Kobe, who, with only five seconds left in the shot clock, is more-or-less forced to take a deep three over Durant, which misses long. Good D from OKC. Against most teams, the sequence creates a clean look for Fish. 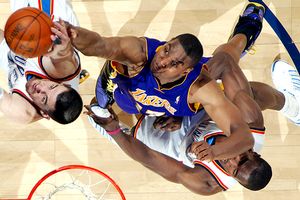 Andrew Bynum didn't play much of a role in the final period, either.

Possession 12) Pau gives to Kobe at the top of the arc. Kobe feeds Artest on the right wing, who looks to Fish in the corner before returning the ball to Bryant. With about 14 seconds left on the clock, Kobe tries again to break down Durant, this time using a hesitation dribble and a nice move to his left, gaining a little space. But Durant recovers, and his length allows him to block the shot.

12 trips covering the first 6:36 of the fourth, producing seven points, three of which came off Kobe's steal-to-Bynum and-one. That leaves a measly four points produced in the half court. Meanwhile, the Thunder didn't exactly go hog wild, but were much more effective, posting 14 points and turning a one point deficit into an eight point lead.

1. After looking at the tape, there is no question Kobe bailed on possessions before he had to, forcing action and leaving himself difficult shots despite there being enough time on the shot clock to create better looks. Initially he looked to exploit a matchup against Harden, one he's looked to take advantage of throughout the season. But when Durant was put on him, it looked like Bryant, who admitted he was surprised by the move, responded by trying to figure out how he would beat it individually rather than continuing to run the offense.

2. On only a few trips did the ball even make it to the post. The guards didn't do a very good job creating angles, and meanwhile the bigs weren't particularly active in establishing position. Rarely did the ball effectively change sides, and the Lakers never seemed to do anything to try and find a better path inside, whether by making the extra pass or by putting the ball on the floor to create space.

3. Once Gasol was back on the floor, I definitely would have mixed in a couple high screen sets with Pau and Kobe, much faster than the Lakers eventually did, just to create some different actions.

4. As Kelly Dwyer of Ball Don't Lie astutely notes, a great deal of the team's problems could be attributed to one-dimensional offense over the middle two quarters as well. One of my least favorite expressions in sports talks about players and teams doing things well "when it matters." You know what? It all matters.

Give the Thunder credit: They played extremely hard, and where they failed to make plays down the stretch in Games 1 and 2, they stepped up and performed on Thursday. Short of people who picked a sweep, nobody should be surprised to see the Thunder win a game. I predicted they'd win two. This is a very good team completely committed to the defensive end of the floor.

But had the Lakers elevated their play, by simply running their offense, they might have stolen Game 3.

There is no reason to panic, but anyone still thinking the Lakers would roll through the first round should put that notion to bed for good.